THE BUG THAT TRIGGERS THE HOG

This article is a supplemental text and an overview the Danica of all the articles and patterns presented on Rakkenes.com earlier.

Unlike most other mayflies, the common fly fisher doesn’t have to be an entomologist to recognize the Ephemera Danica. The sheer size of the bird is alone enough to identify it when you see the insect sailing down the streams.

In Norway the Ephemera family is only represented by the Vulgata and the Danica. The brown-olive Vulgata only lives in still waters, as opposed to the Danica that usually is found only in running water. So if you see light olive or creamy one inch (2,5 cm) on the river, you’ll know what you see. 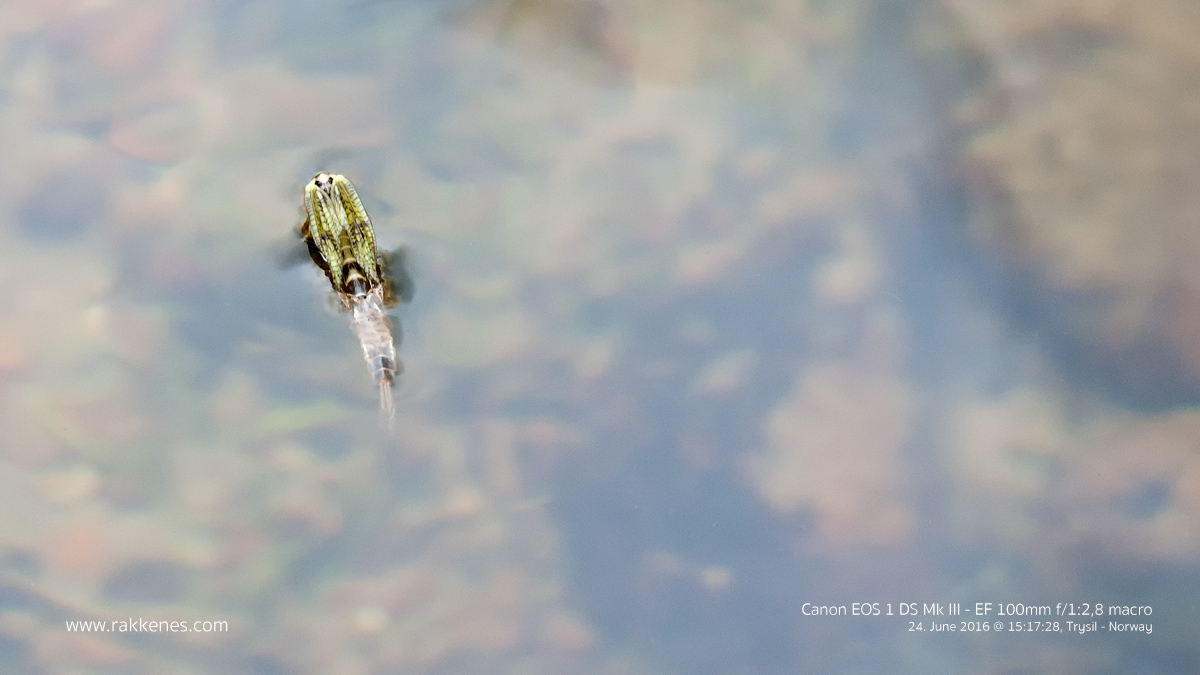 The Danica has just broken through the nymph skin 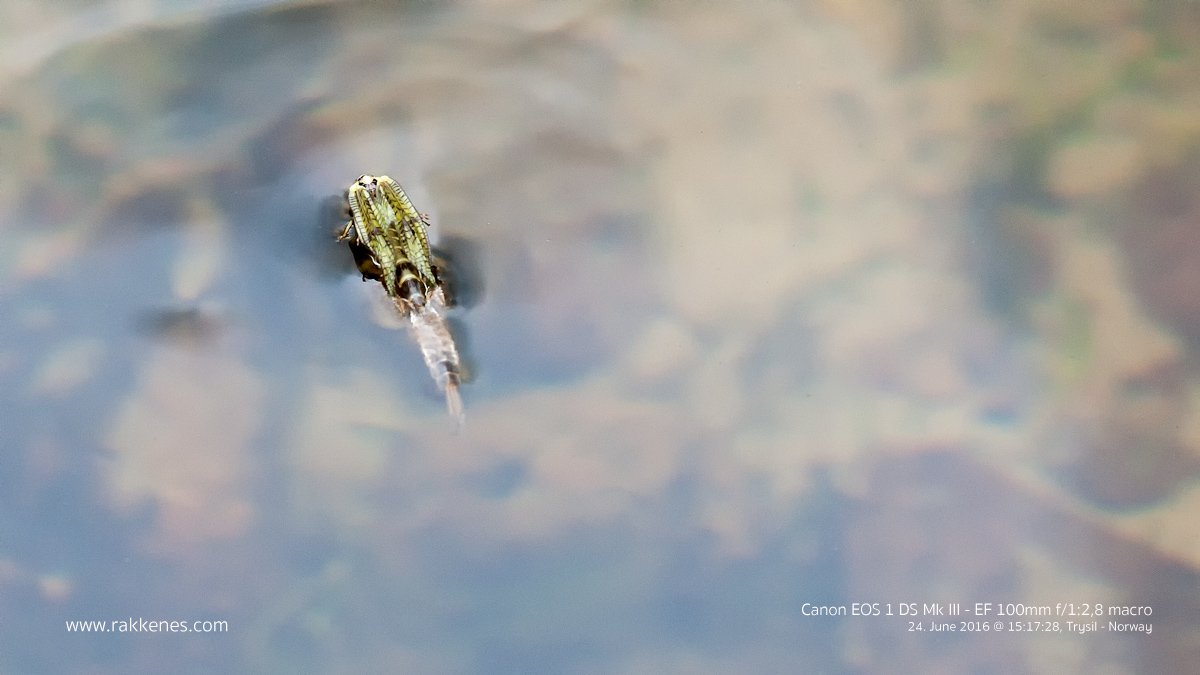 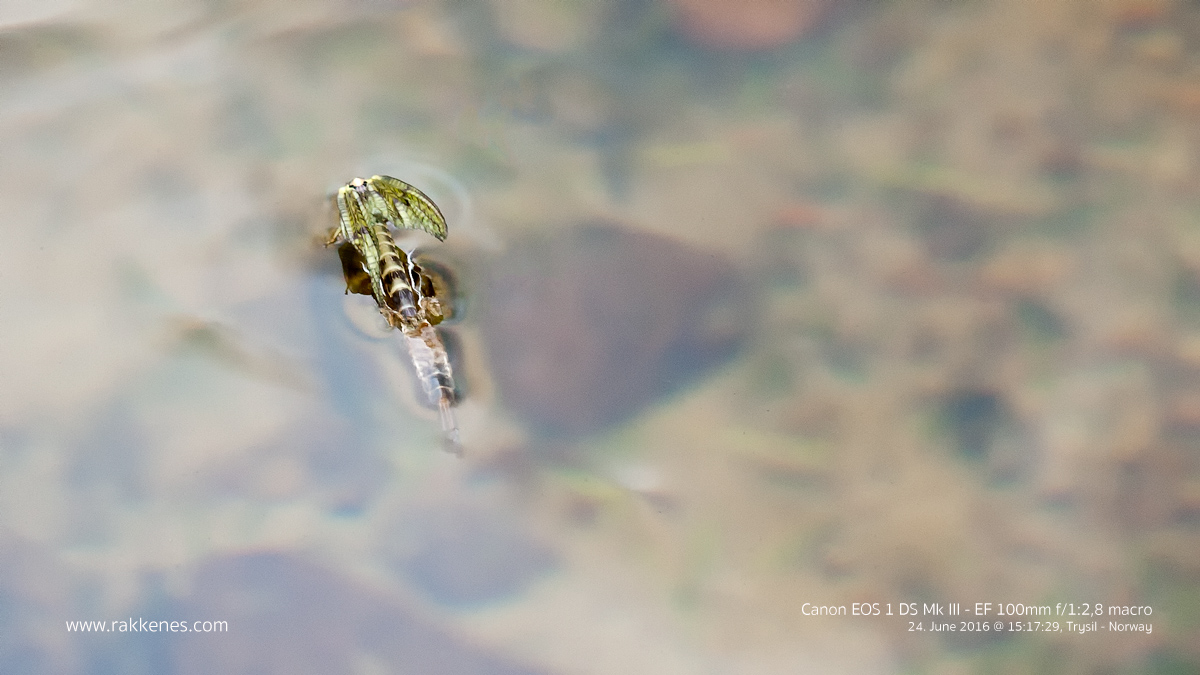 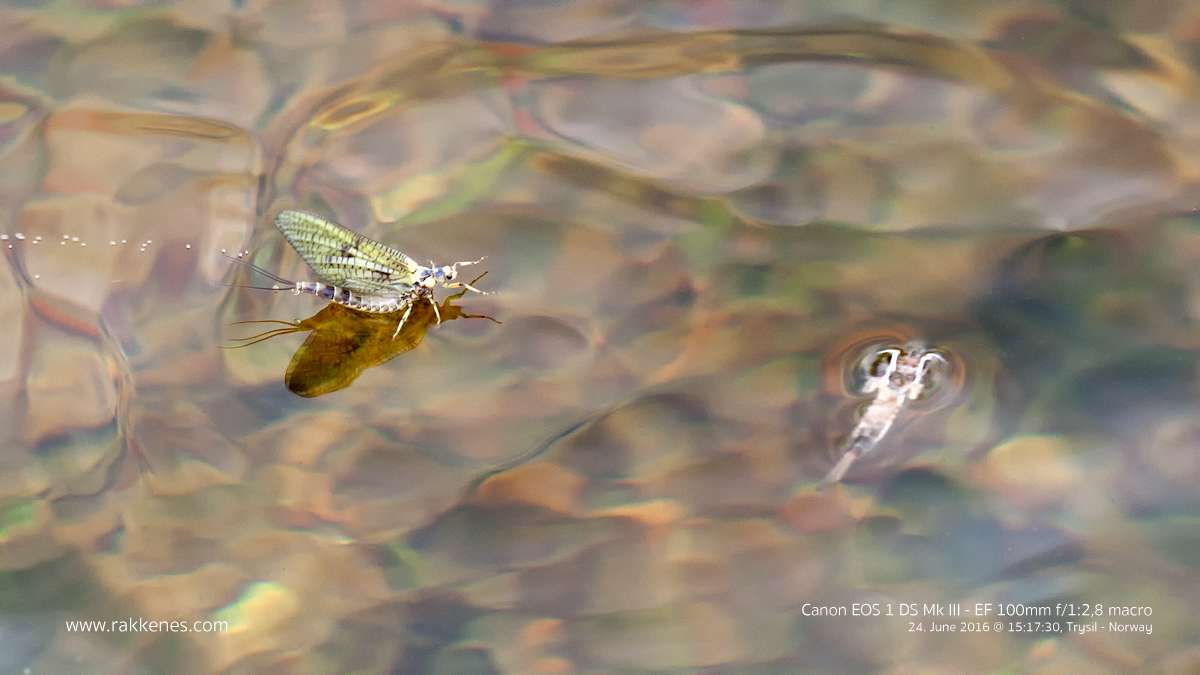 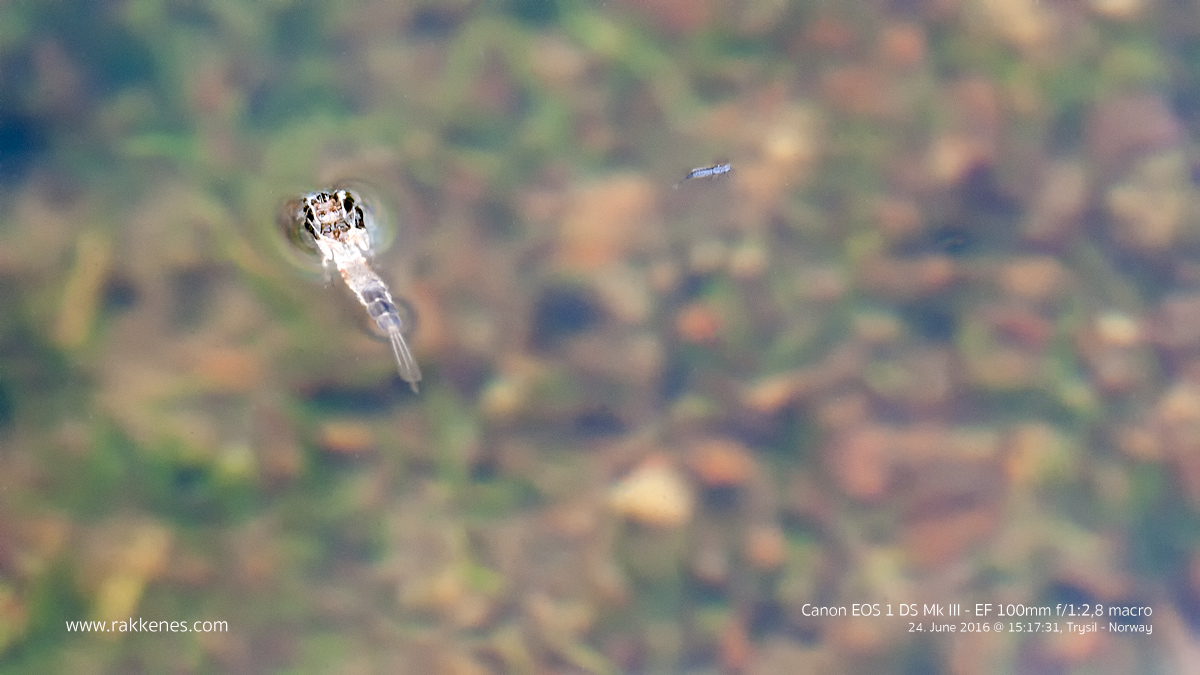 But here are some entomological facts about the Ephemera Danica 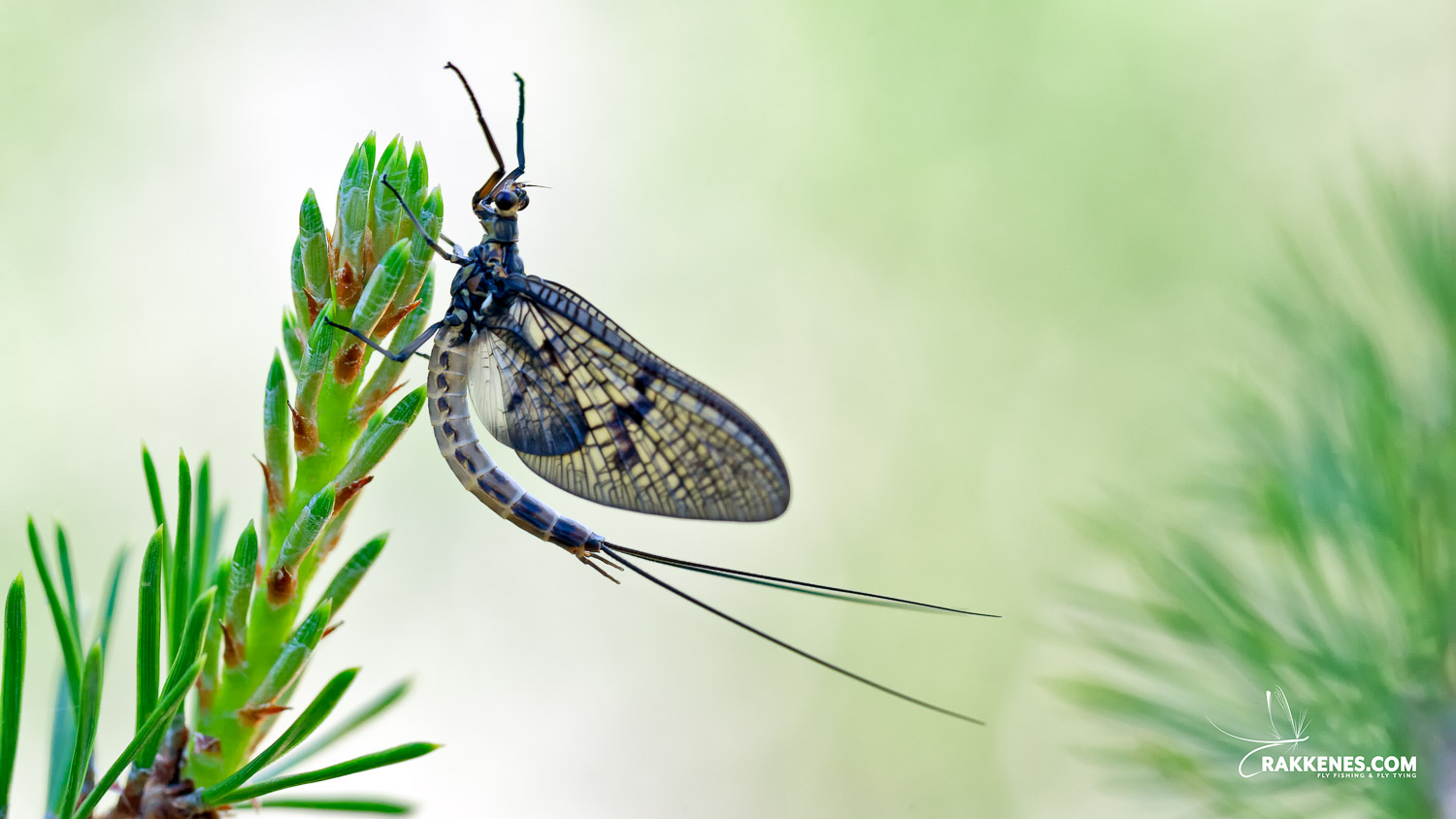 A newly hatched Danica safe in the threes 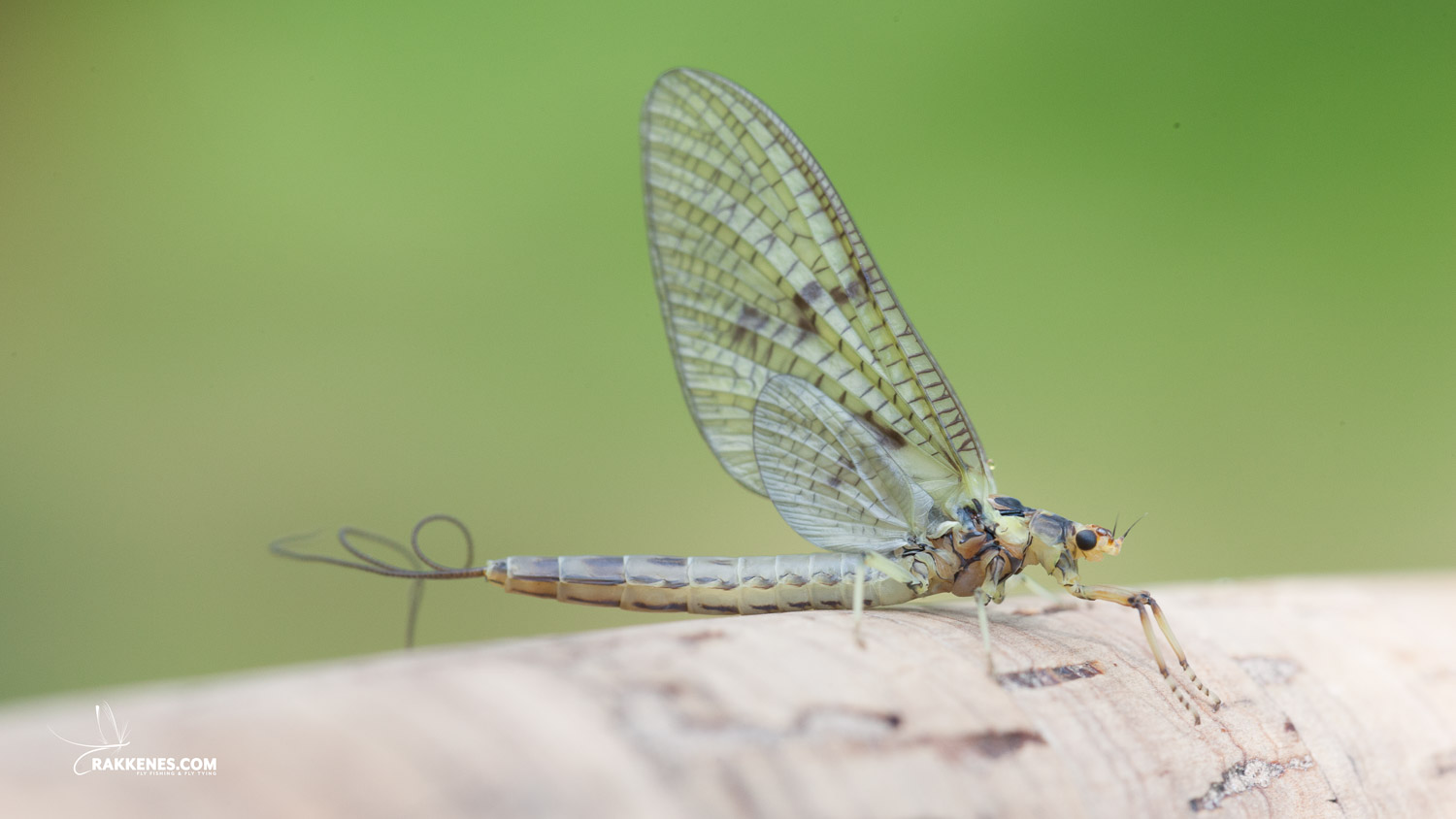 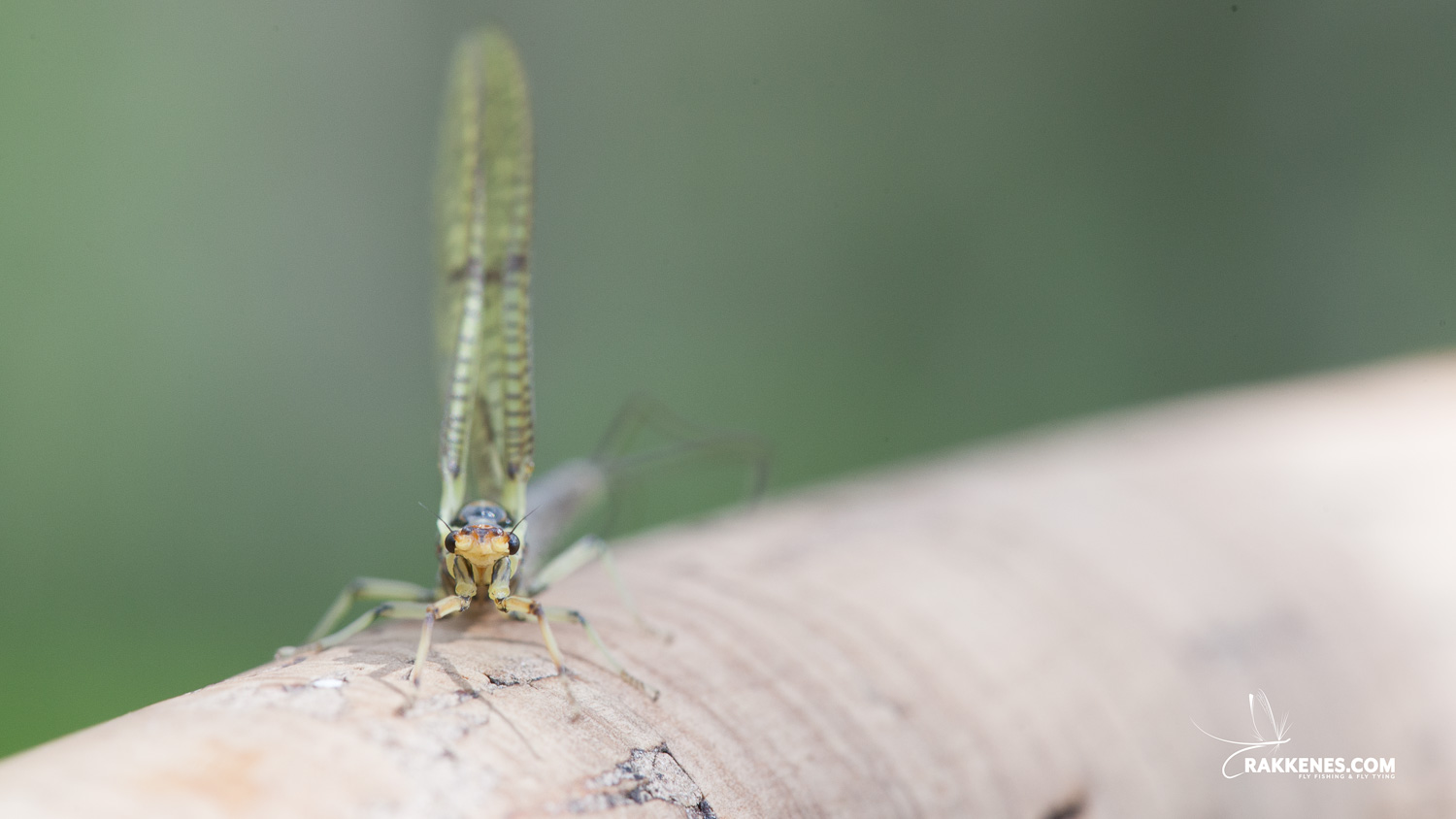 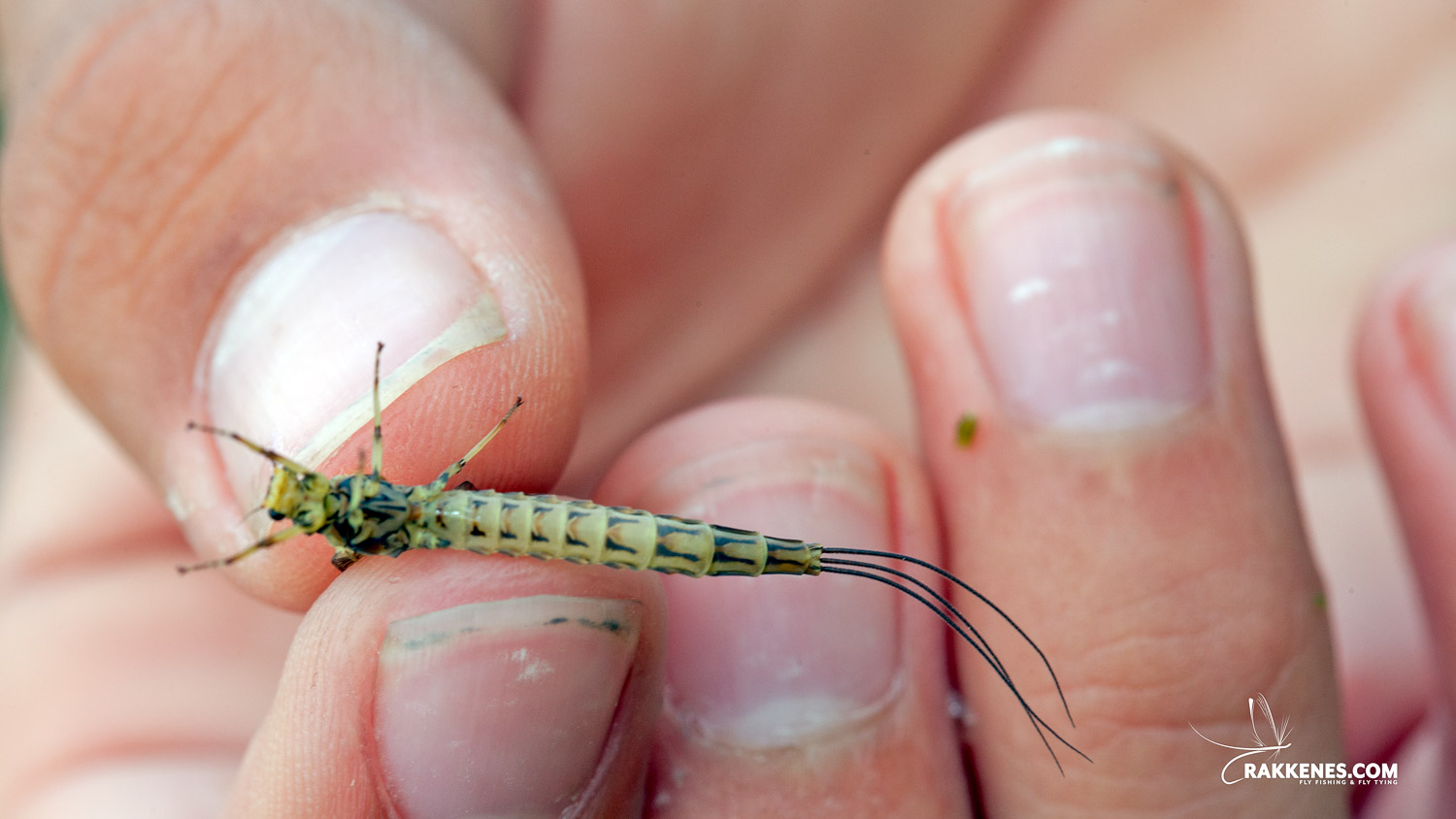 In my waters, the Danica usually hatch from mid/late June and for three or four weeks. Depending on the water, the Danica is usually quick break-out from the nymph shell. Usually it only takes the emerging nymphs a few seconds to break out of her shuck.

Unlike many other species, such as the Baetis or Ephemerellas, the Danica doesn’t refuse a sunny and warm day. In fact, my fly fishing diaries confirm that the best Danica hatches happens under a warm morning or early afternoon sun.

I have been kind of pseudo studying the Danica for years. Not scientifically, but merely observing the hatch and taking notes in my diaries. A couple of years ago I took careful notice of the efficiencies of the different imitations. What I found was that the Danica emerger pattern will outfish all other imitations for at least one week into the hatch. Over the years I have also found that a good dun imitation, such as the Mohican or a simple extended body fly, is all you need fishing both spinner falls and duns. 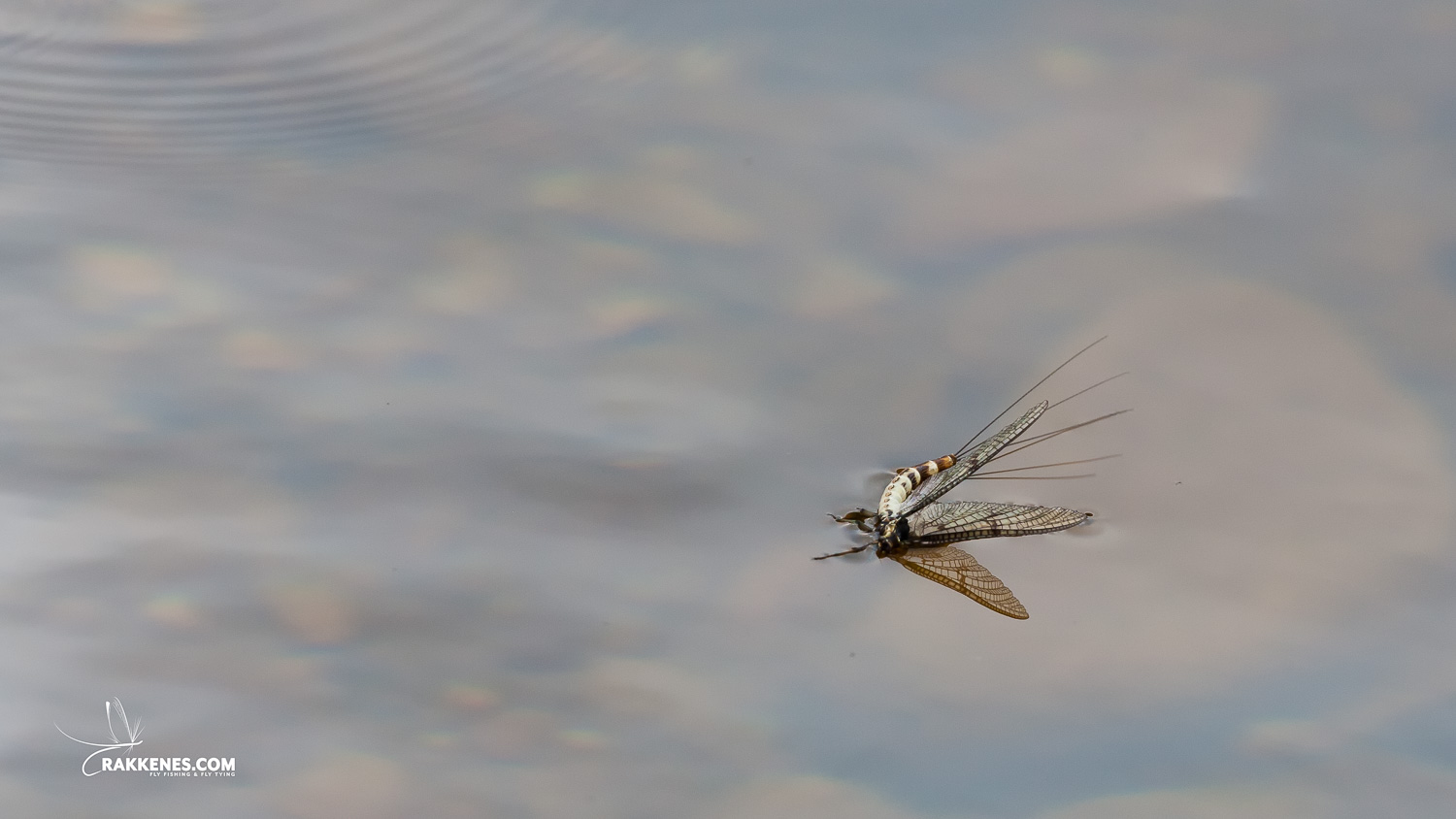 Not all spinners are spent 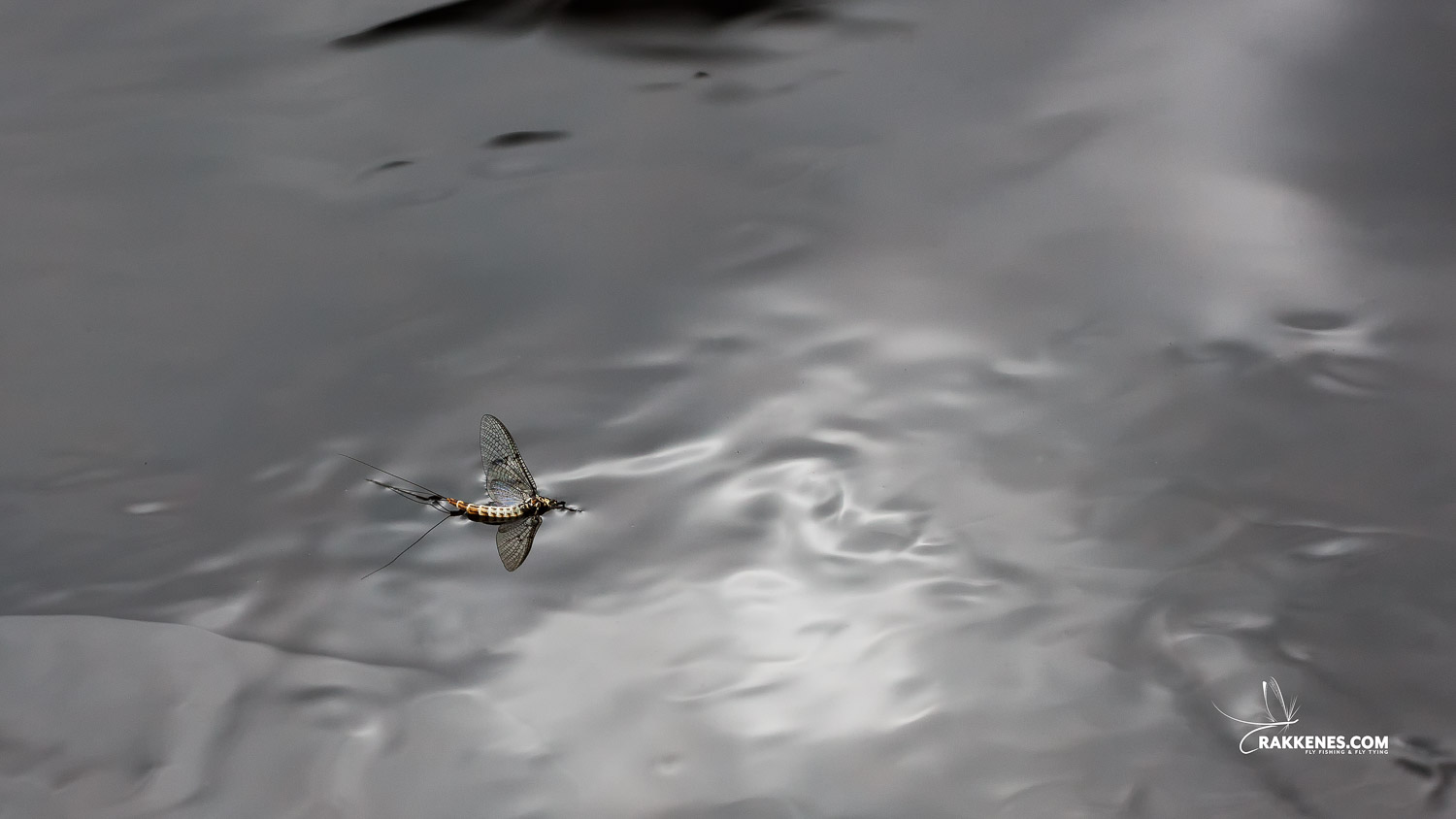 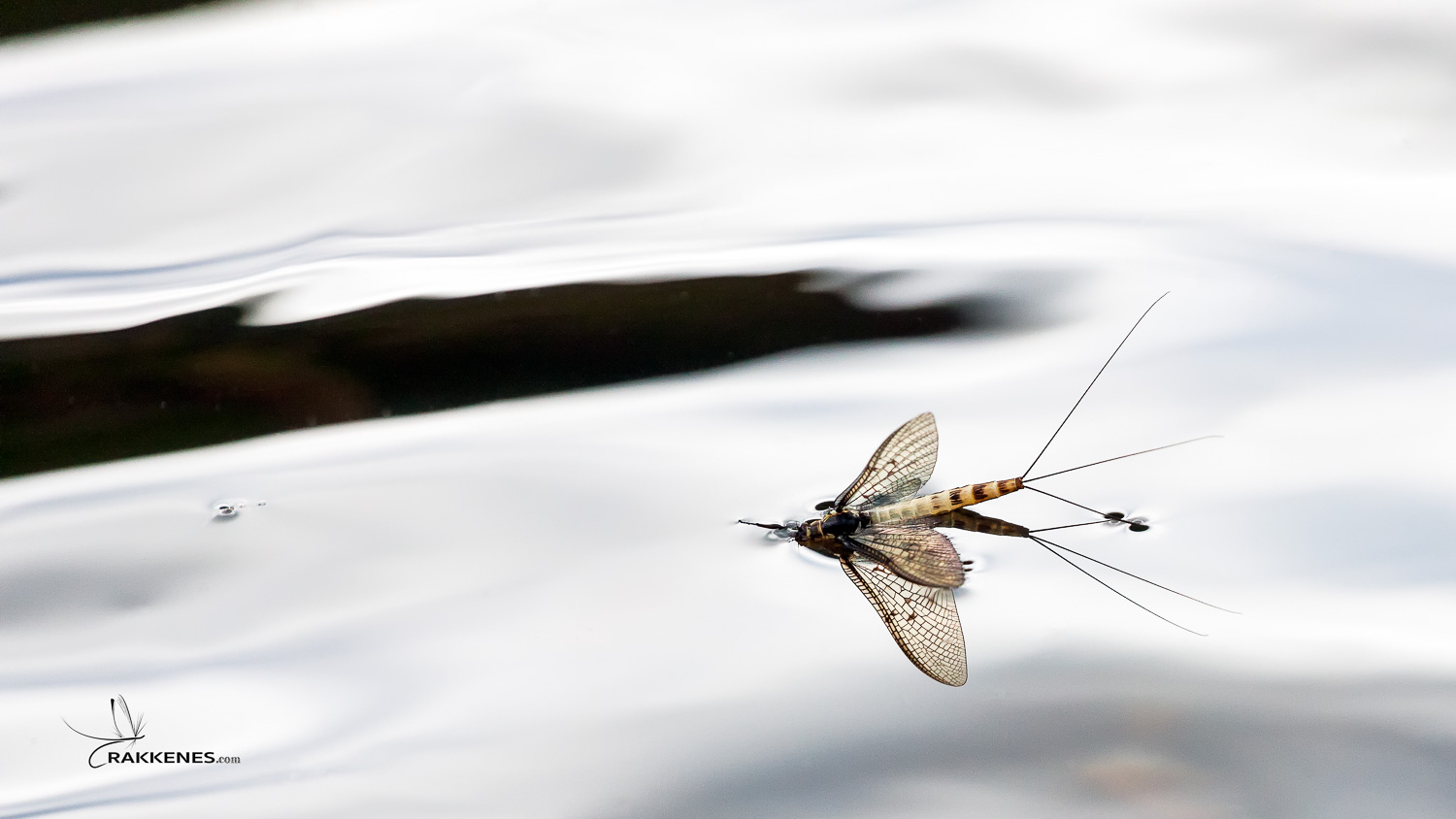 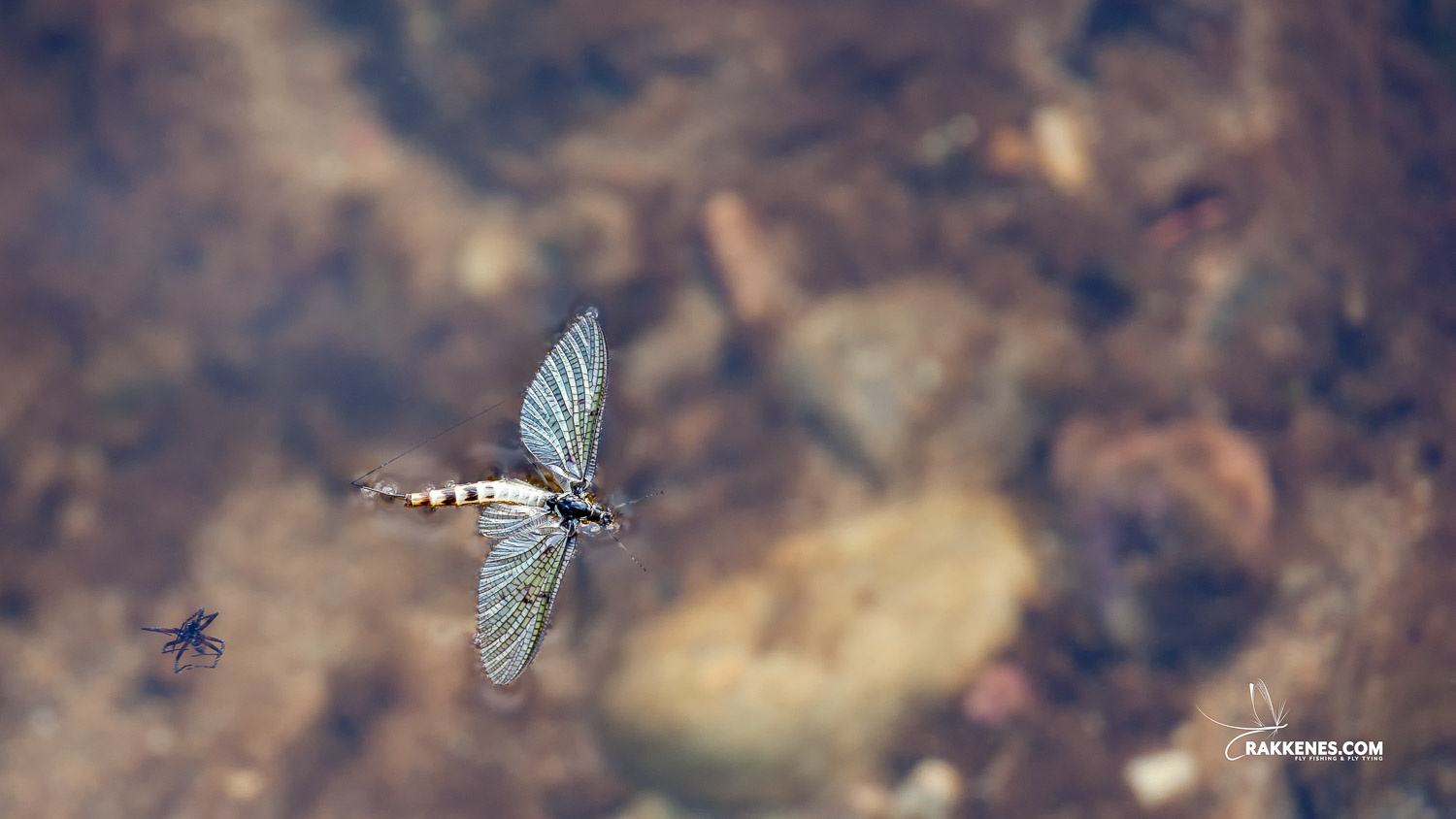 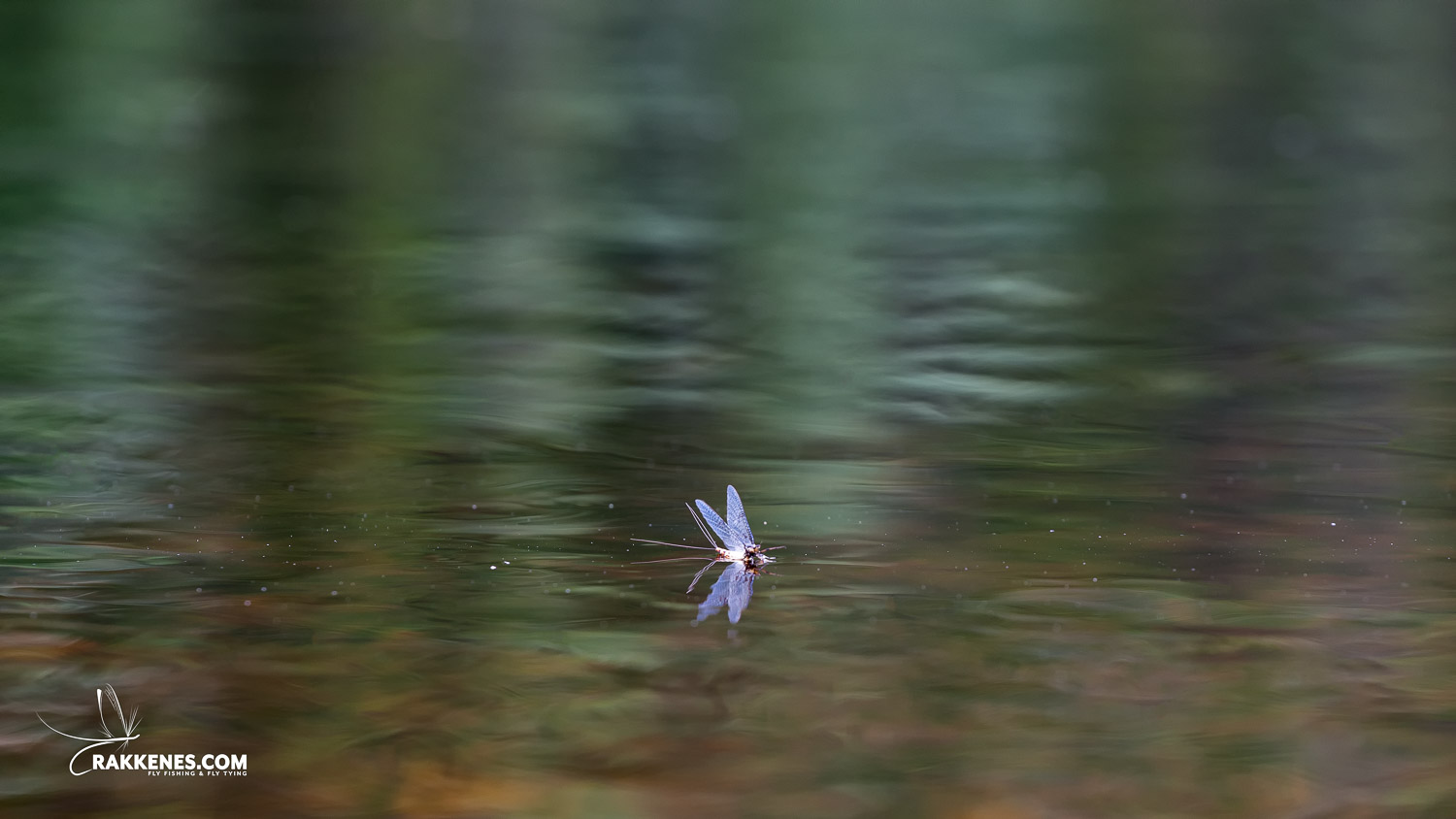 1: Opt for an emerger in the first week of the hatch

The first week after the hatch cycle has started the emerger pattern is my first choice. The mayfly use some time to break out, and the fish sees the may fly as an easy prey. In the start and peak of the hatch cycle, there are simply more nymphs and emergers than duns.

2: Reduce the size of your imitation

Do not exaggerate the size of your Danica. Even if the Danica is up to an inch in size (2,5 cm), you may fish it as small as two centimeters. It does not reduce the attractiveness of your fly, and it gets a hell of a lot easier to cast without messing up your tippet or leader.

3: The spinner fall is sensational

In my view, the Danica spinner is the most interesting to fish. Often it may seem that the trout is not very keen on the newly hatched dun. Either the trout gets fed up, or they simply feed sub surface for nymphs or emergers. But in the evening, when the sun sets, and the air is calm, the Danica returns to the river to lay their eggs. Most of my trophies are caught during the spinner fall. And you don’t need a spent spinner to fish the spinner fall – try a creamy parachute dun pattern.

4: Trout can ignore the Daniacas

Very often the Danica hatch comes together with other attractive may flies, such as the Dalecarlica or the Sulphurea. When that happens, you should be on your toes. Very often it happens that the trout stop feeding on Danica and choose the fly that outnumbers the Danica on the river. This happens often, and especially in the final stages of the Danica hatch.

This phenomenon is well known in literature. Doug Swisher called it the “Concealed Hatch” dilemma in the book “Selective Trout”.

5: The Danica loves the summer

In contrast to other may flies, the Danica does not demand rain and moist weather to hatch. The Danica loves a clear and warm day. The hatch often start around 11 and can last as long as five or six hours into the afternoon.  The spinner falls in my waters usually start around 22.00 in the evening.

MORE ON THE DANICA

ARTICLES ON THE DANICA

A collection of articles and information on the Ephemera Danica in Norwegian waters. Observations are mostly done in different rivers in Trysil,  Norway.

A collection of our favorite patterns for fishing the Danica hatch cycle. All patterns are fished and successfully tested in Norwegian waters.

We are continously competing our website with photographic and video studies of the insects that makes fly fishing possible. Some of the articles are listed below.