The Baetis niger and Baetis digitatus (Iron Blue mayflies) are a great indicator of the health of the river where they live. They are demanding rascals only thriving in neutral non-acidic and clean water. In Trysil the Baetis Niger is the most common of the two.

Baetis niger and Baetis digitatus are two small mayflies, among the first mayflies welcoming spring at the river. The Baetis niger is the most common of the two. Practically speaking, if you stumble across an Iron Blue you can be pretty sure it’s a B. niger. The Baetis Digitatus is a rare little beauty in Norway and Trysil.

But hey, it does not really matter. For practical fly fisher or fly tier, both of the mayflies can perfectlyl well be fished with the same imitation. 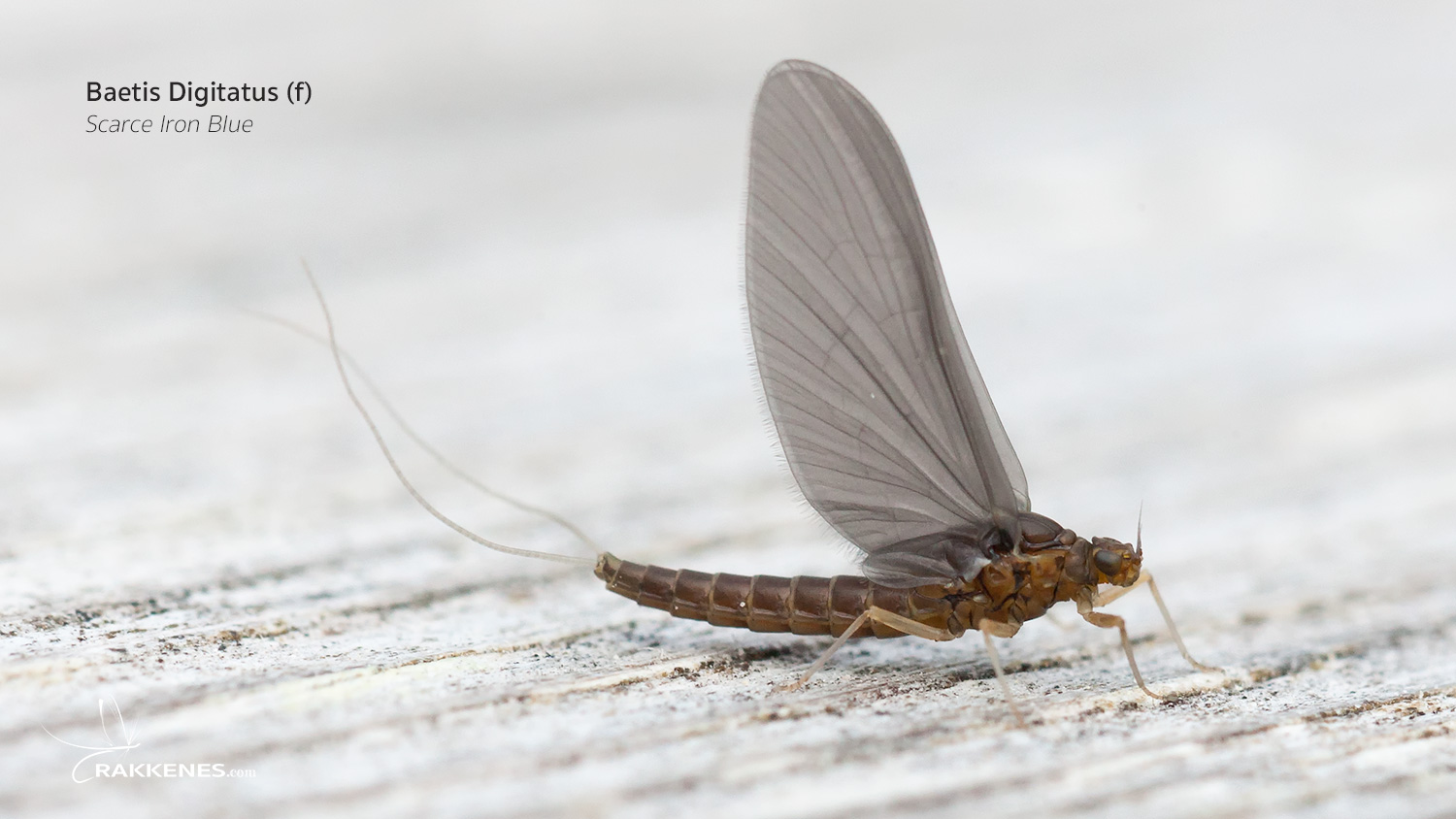 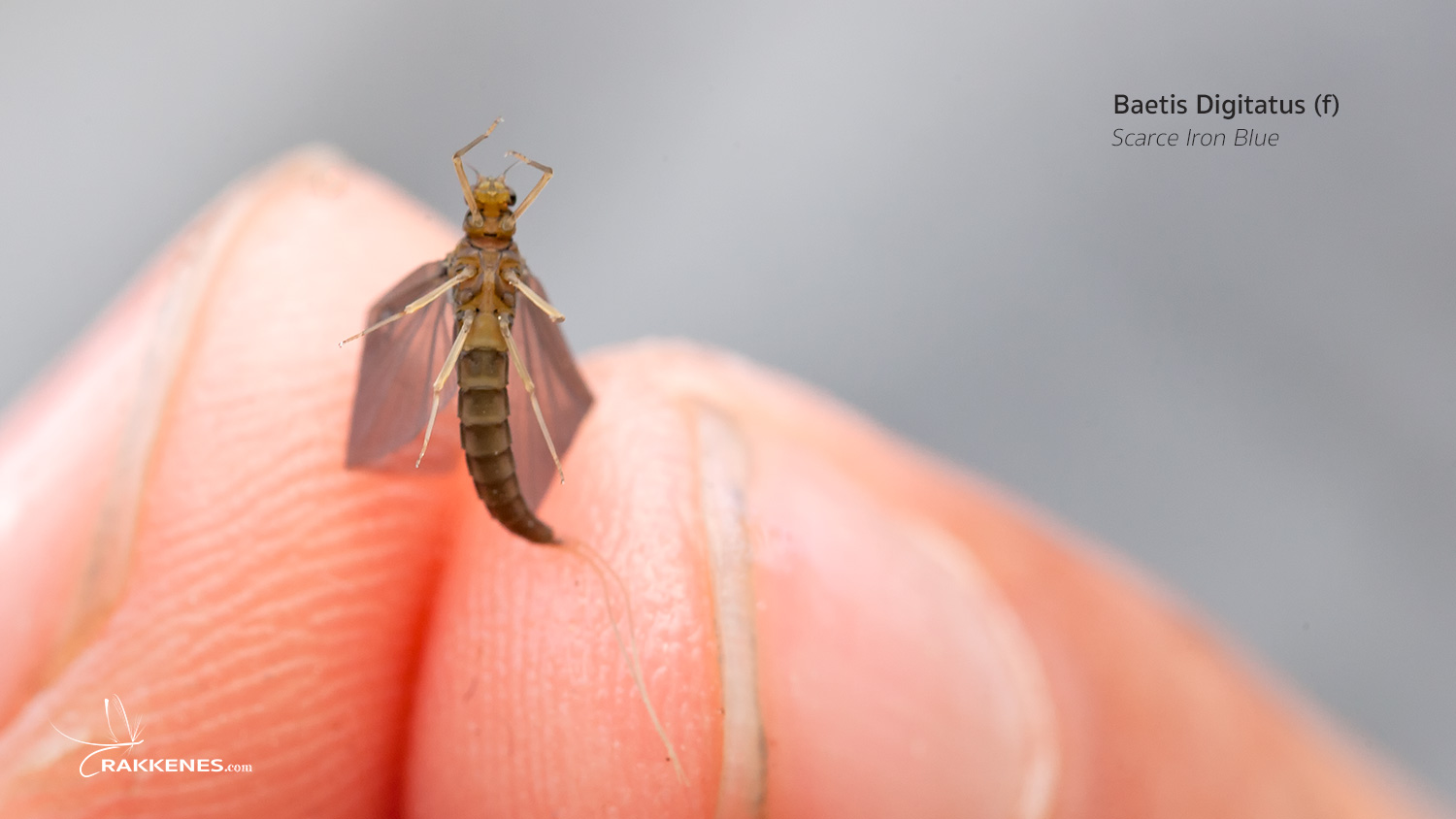 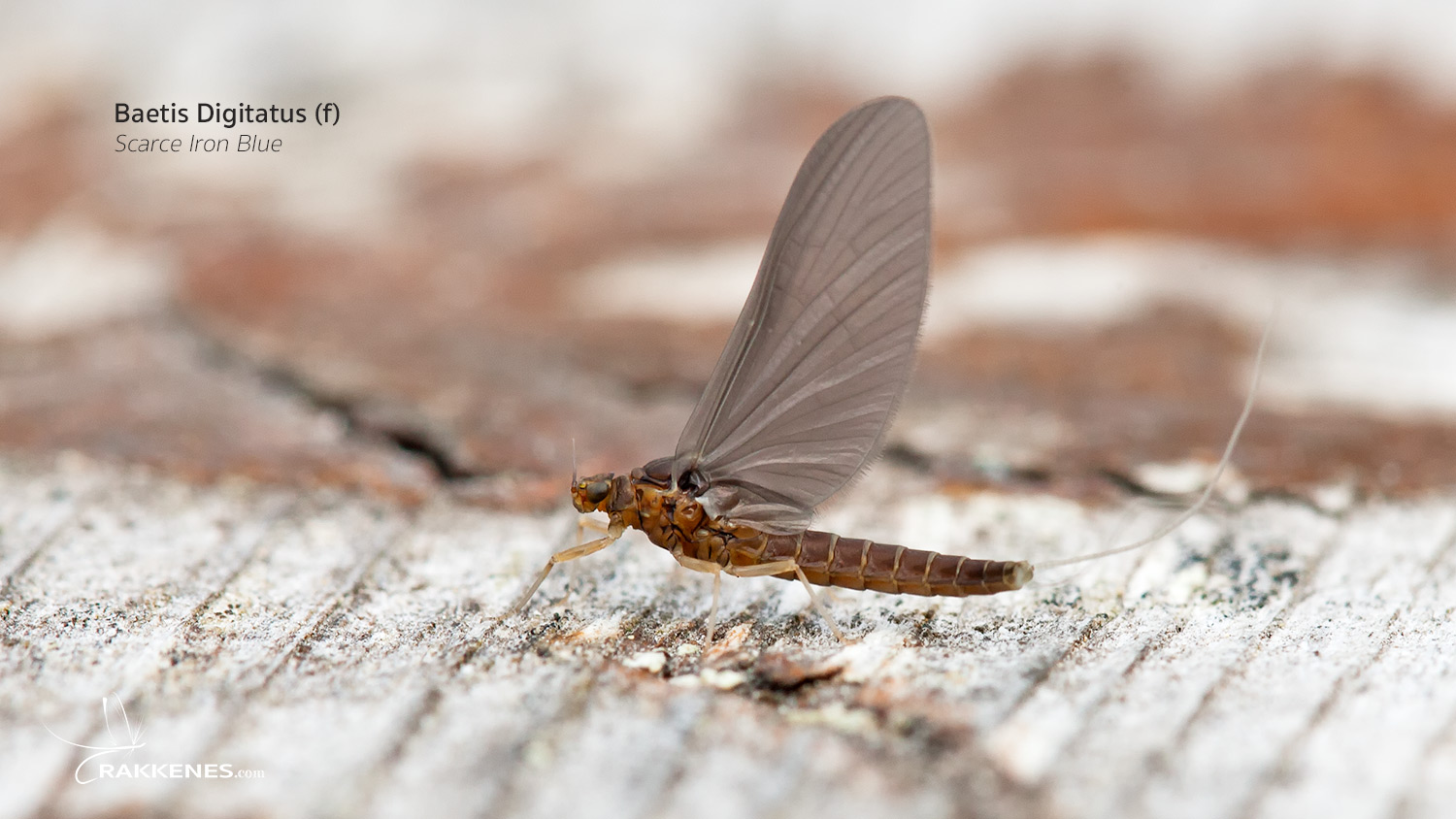 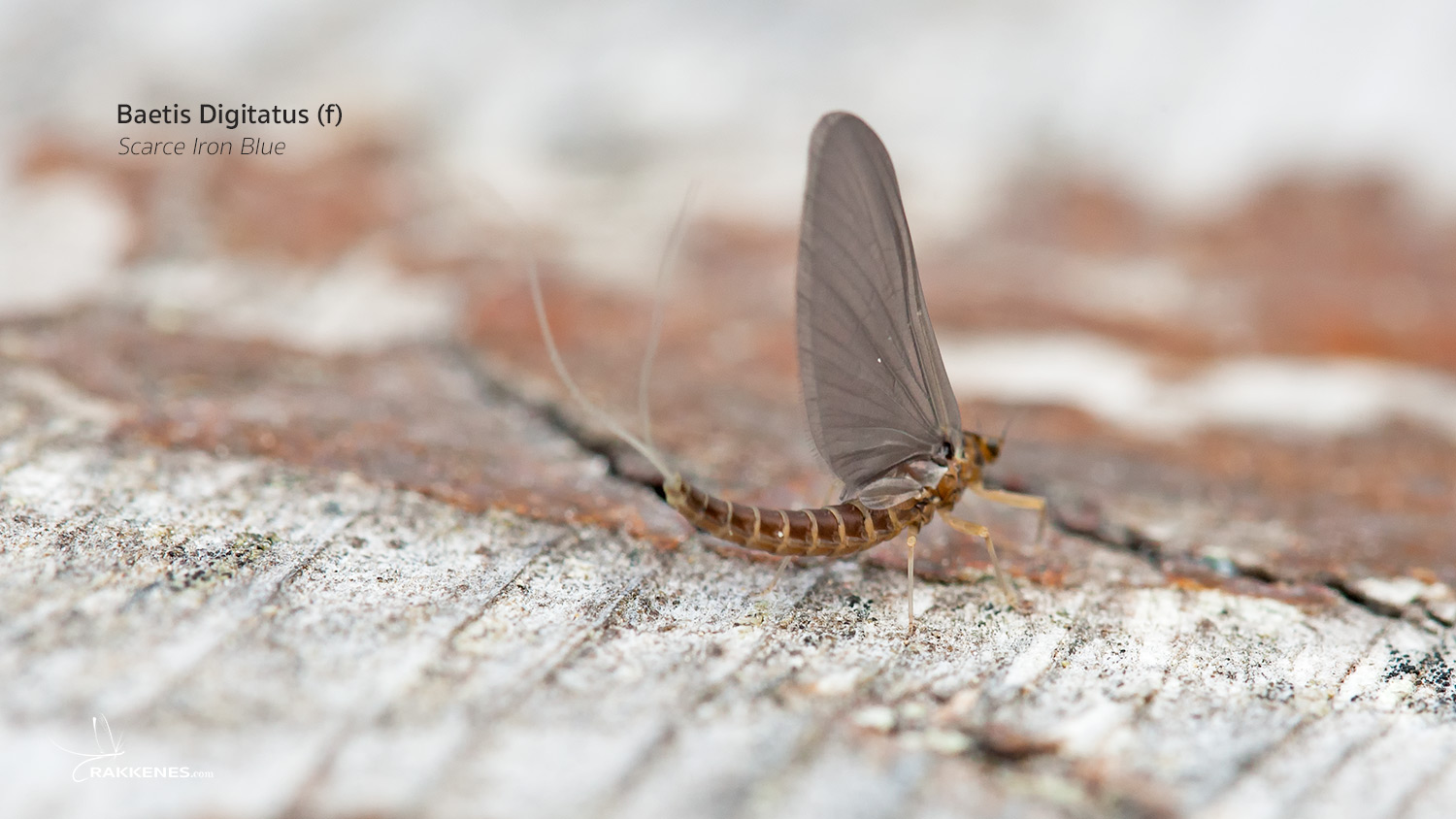 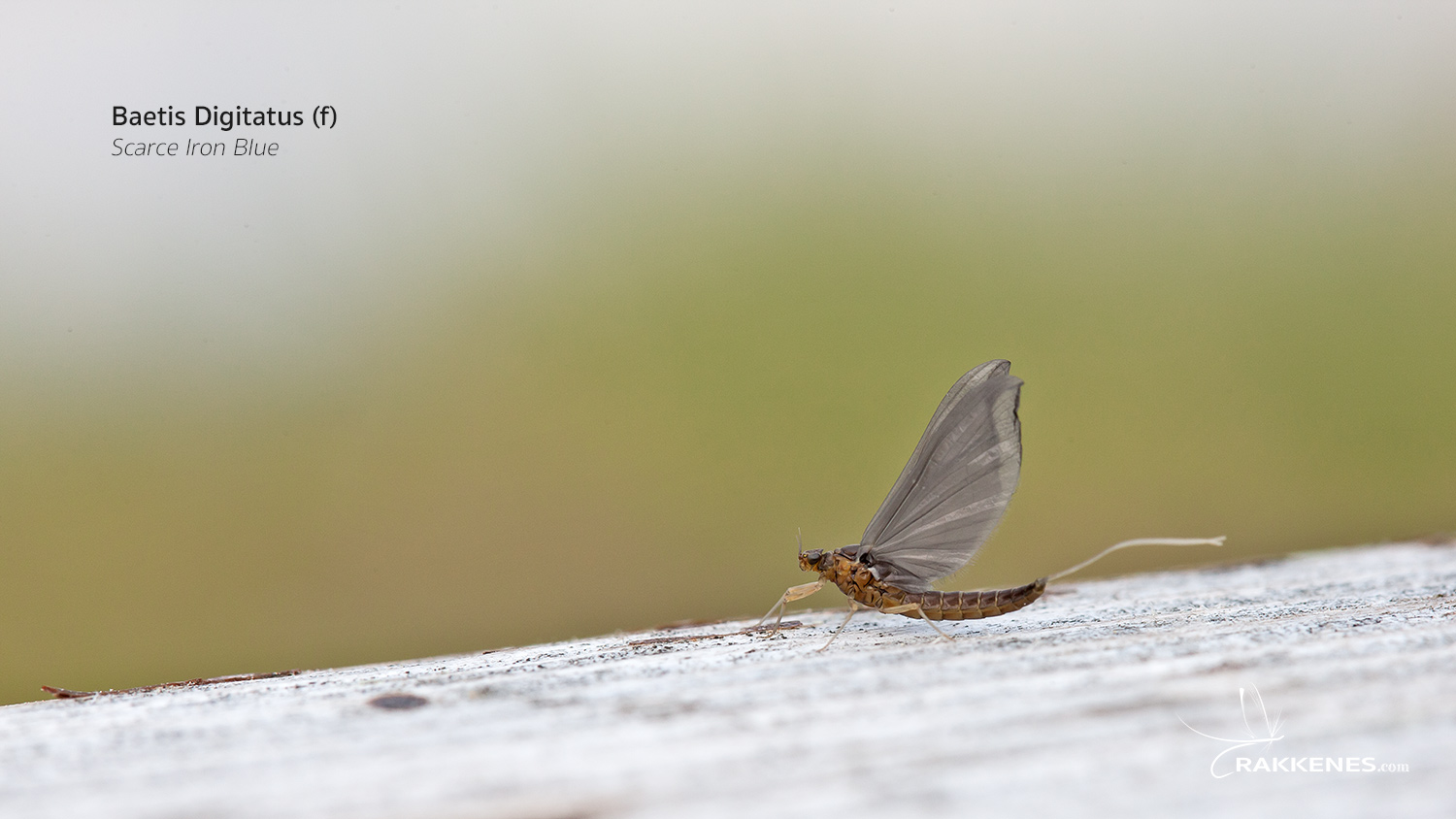 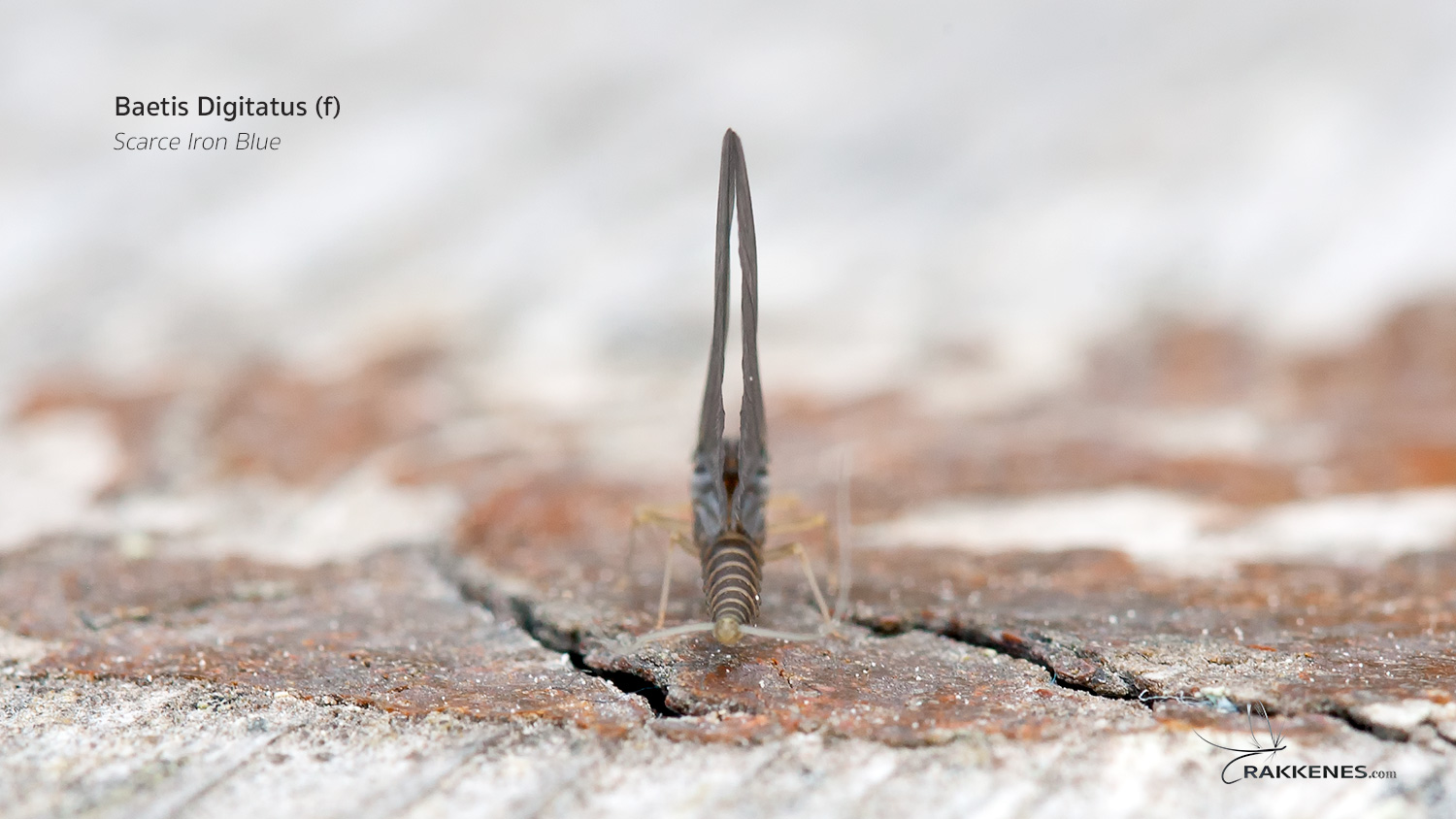 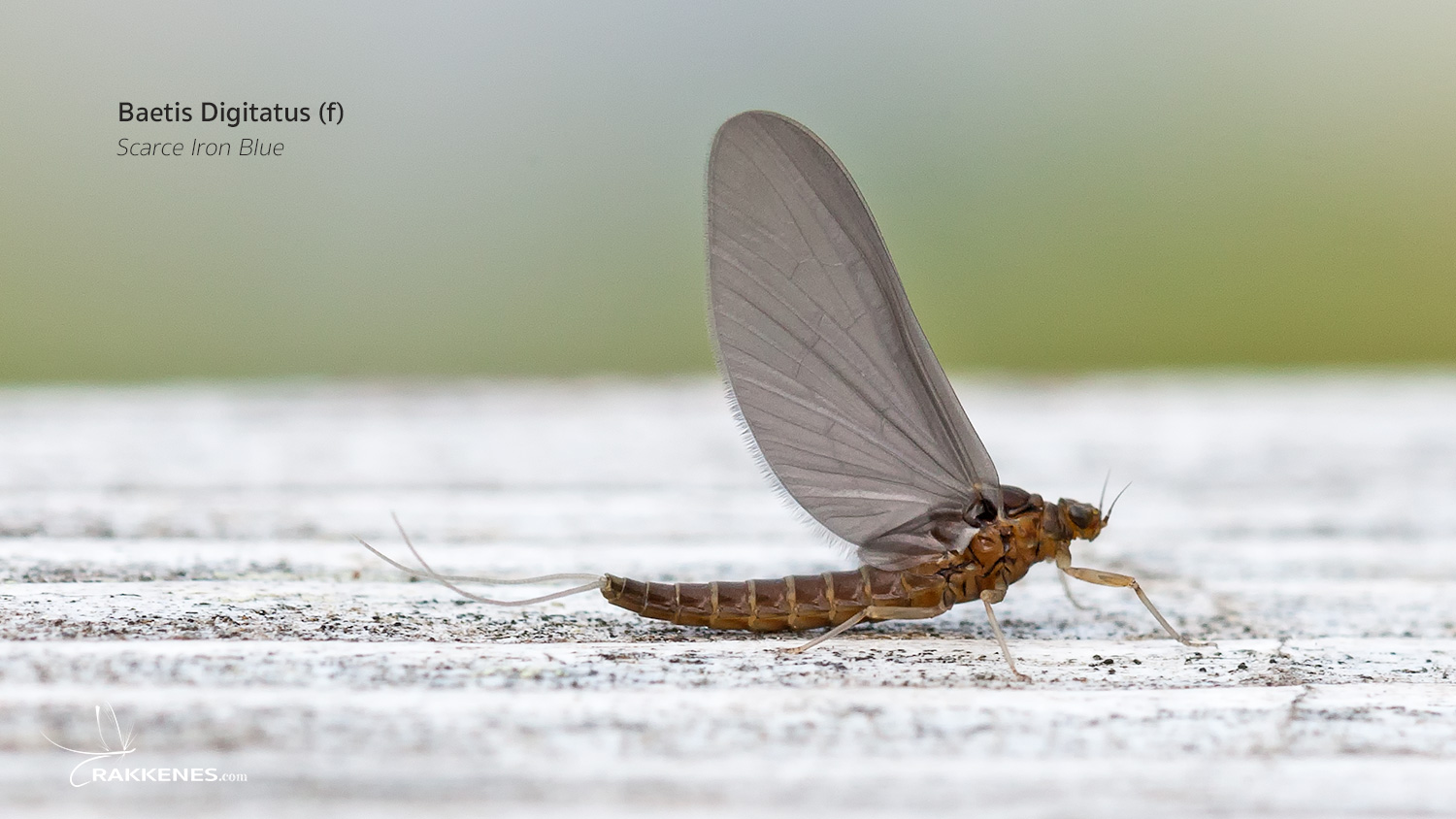 The Baetis niger and Baetis digitalis are only 5-8 millimeters long, with two tails and small oval hindwings. The sub-imago has dull yellow green eyes in the female and dull red brown almost orange eyes in the male (see photos). In both sexes the wings are a dull grey blue color and the body is dark brown which is sometimes tinged with olive. The legs are pale to dark olive brown, whilst the tails are dark grey. The imago has transparent wings and pale grey legs and tails. The body in the female is dark claret brown, whilst in the male it is translucent white, with the last three segments being dark orange brown.

Baetis niger and B. digitatus can be distinguished from other adult Baetidae by the presence of only two veins on the oval shaped hind wing, the second of which is forked. The only other Baetidae species with a forked vein is Baetis muticus, however this species has a third vein which runs along the lower edge of the wing. It is often difficult to see the third vein, and care must be taken to double check whether it is present or not.

Separation of adults of Baetis niger and Baetis digitatus is very difficult, and probably impossible for most of us. The separation in my photos in this article is made purely on my assumption from having experienced these hatches for years. I might be wrong.

From lunch until teatime

In Norway the Iron Blue – both the Baetis Niger and Baetis Digitatus – only hatch in one generation. In several other European countries they hatch in two generations, typically in April and September. In Trysil these guys start hatching late May, early June.

They are known as the lunch till tea fly, meaning that they hatch from 11 am and for a good three hours. Then its over. As most Baetis flies, they love bad weather. If you are out on a rainy day, and the water is above 10 Celcius in  May/June, you can be certain that you’re going to experience a good Baetis hatch. 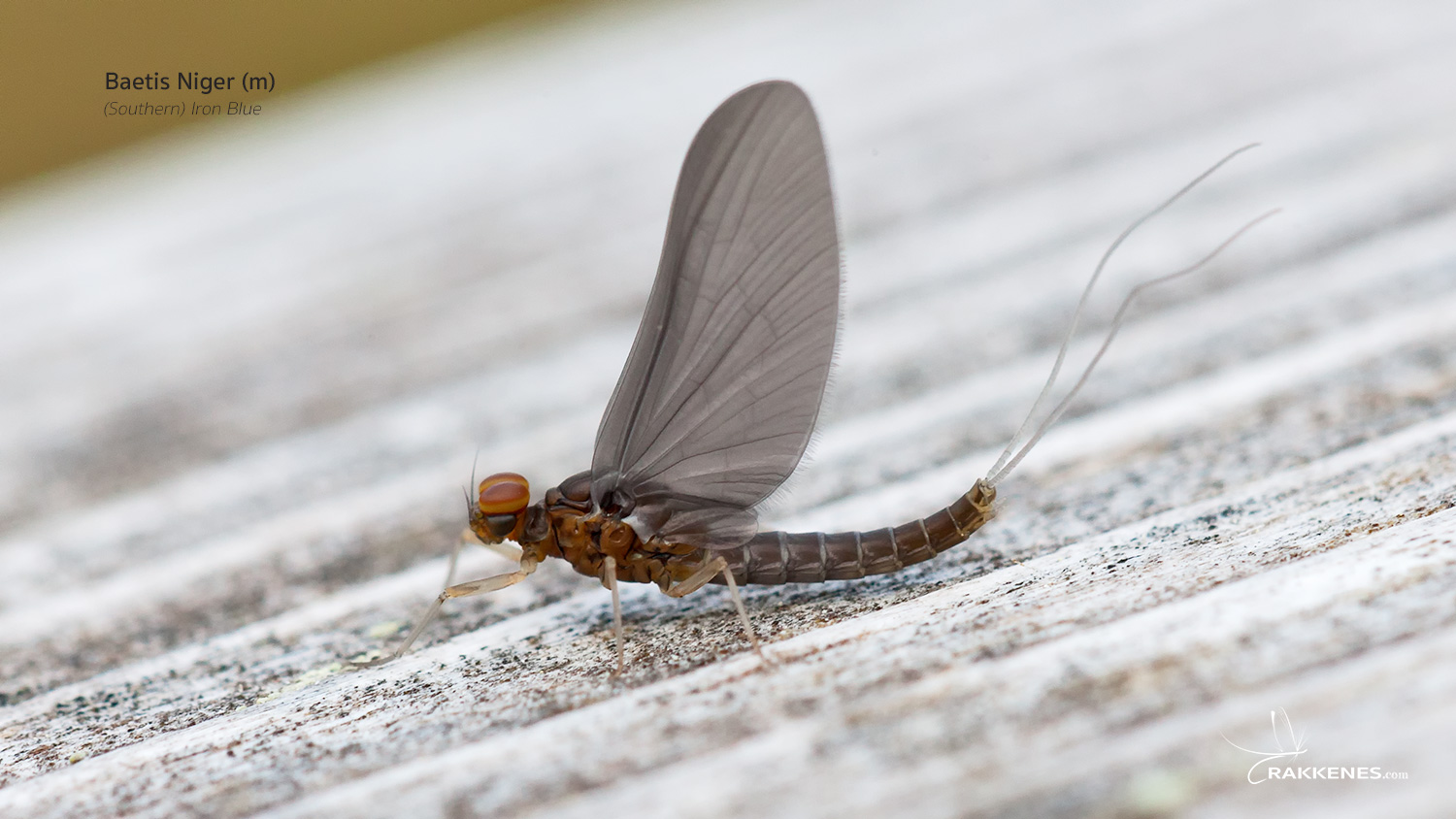 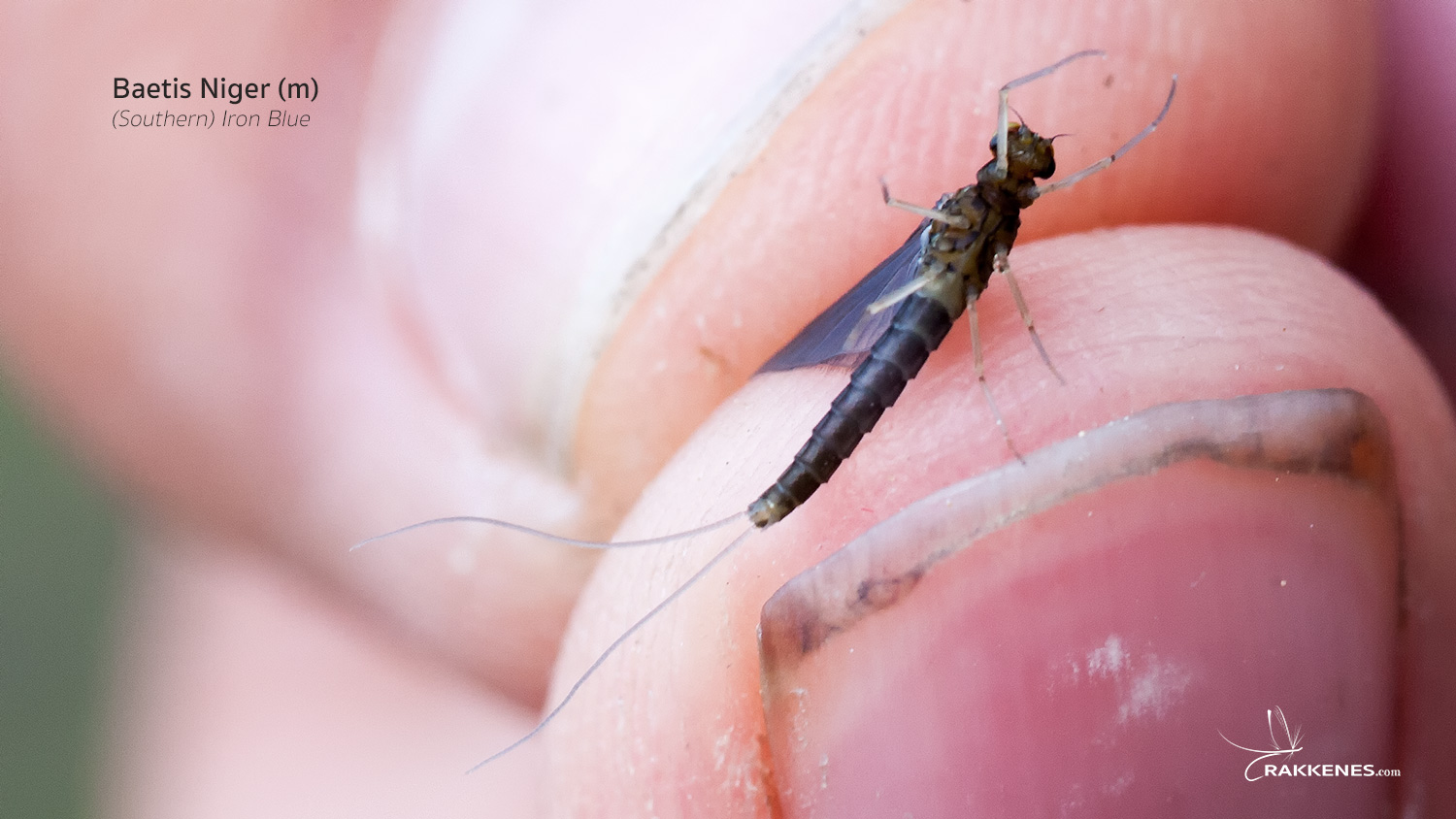 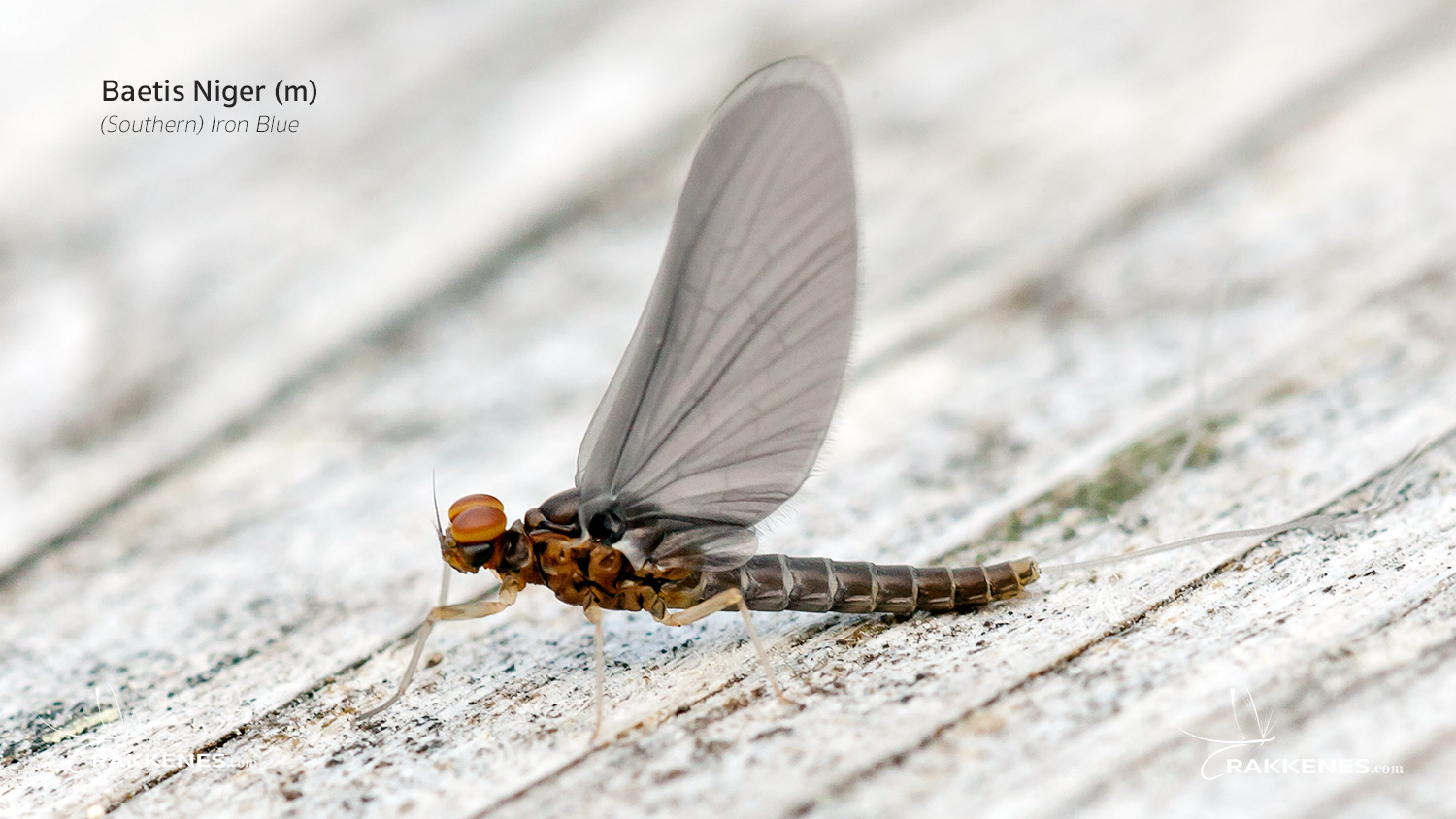 Outnumbered by the Baetis Rhodani

The iron blues emerge at the surface in open water. The tactics on fishing them is therefore very much similar to the Baetis Rhodani or the Blue Winged Olive (Serentella/Ephemerella Ignita).

The trouble is, however, that very often in Trysil these hatces are dominated by one of the cousins of the Iron Blue – namely the Baetis Rhodani. To often have I experienced good hatches of the Baetis Niger and Baetis Digitatus starting about 12 o’clock, only to be outnumbered by the B. rhodani at 1.30 pm.

Iron Blue spinners lay their eggs in the afternoon, and are great imitation object for the fly fisher. The female spinner is often confused with the Leptophlebia Vespertina (the Claret Dun) due to the similarity in appearance and the simultaneous hatch cycle. The male spinner however is easily recognized with a glass clear see through body with distinct brown segments at the end of the abdomen (see bad picture in one of the carousels).

MORE ON THE AQUATIC BUGS

I am documenting my home water in Trysil Norway. All the insects are found throughout Europe and the USA however.