Theory and experiments are fun and rewarding. In this article I am water testing two common spent spinner patterns: CdC wing vs tied-up hackle wings. 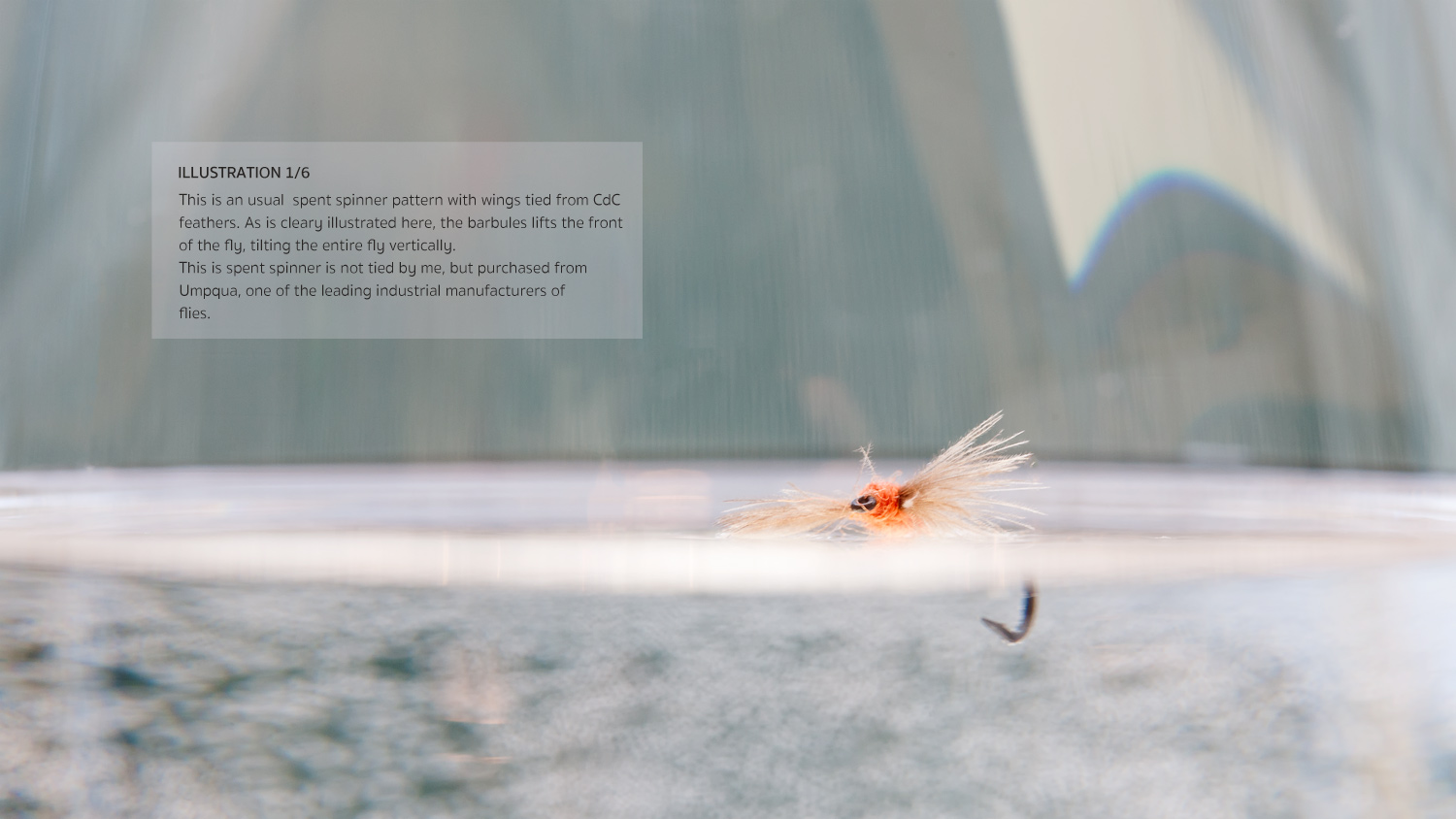 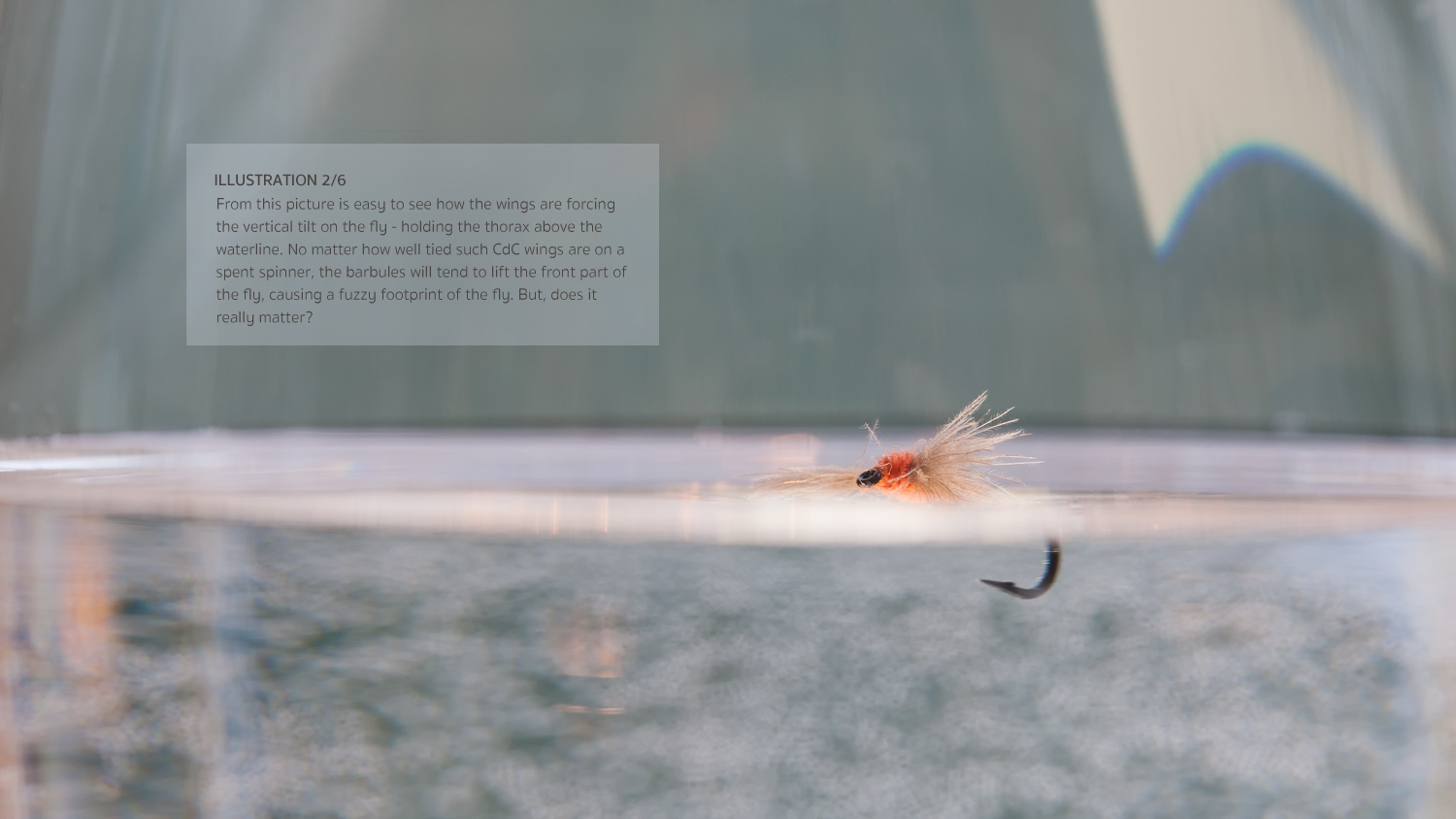 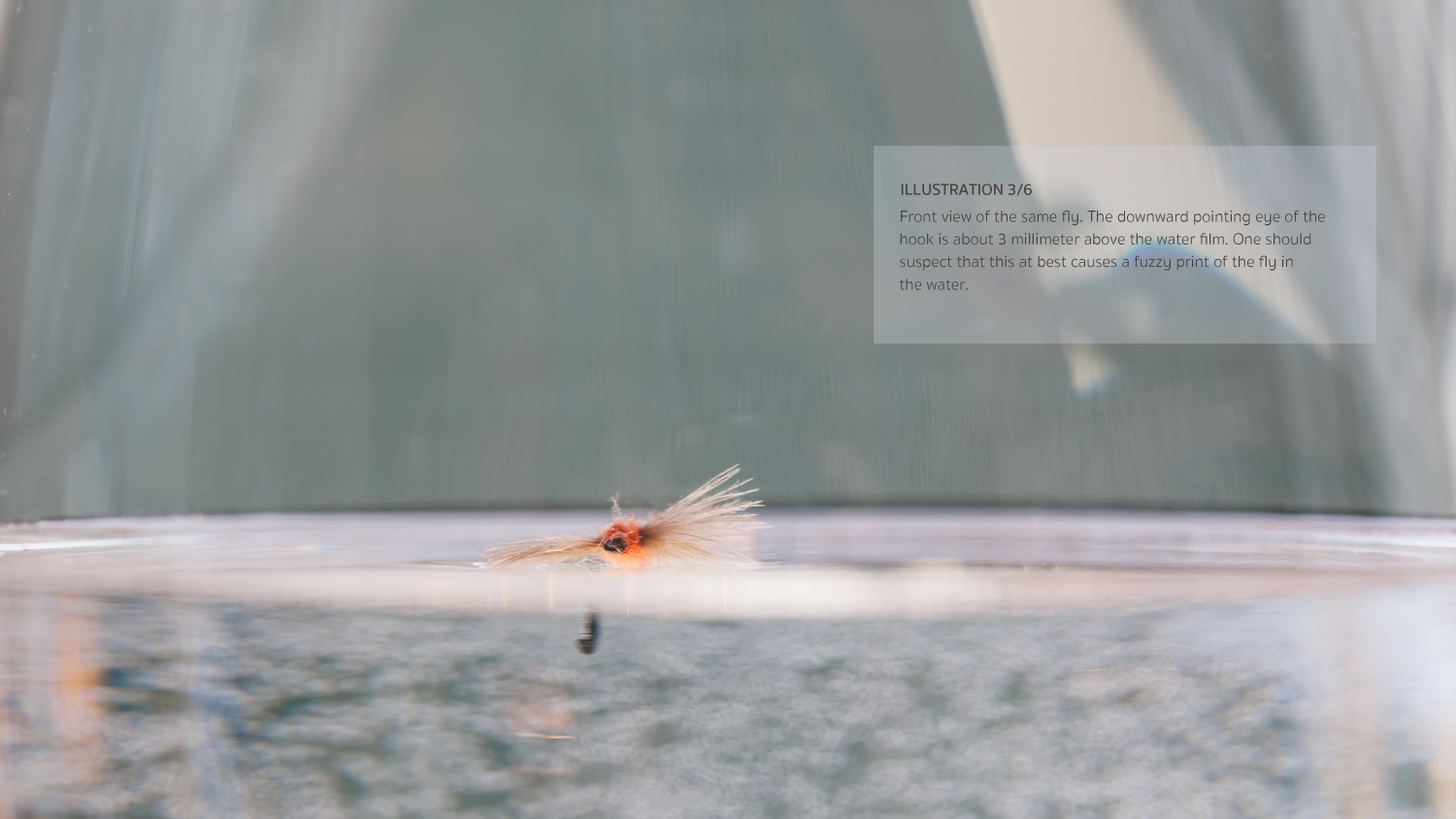 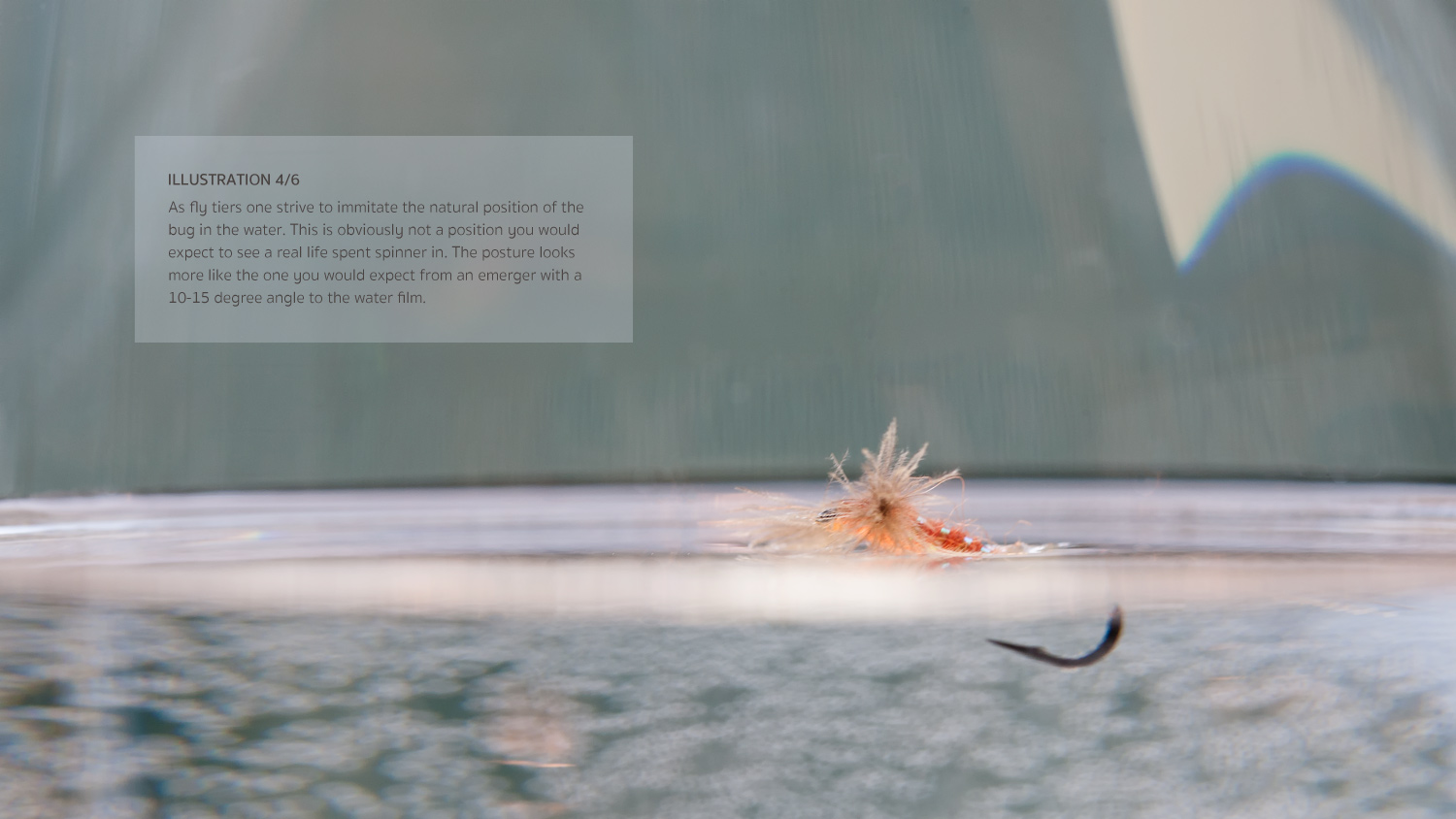 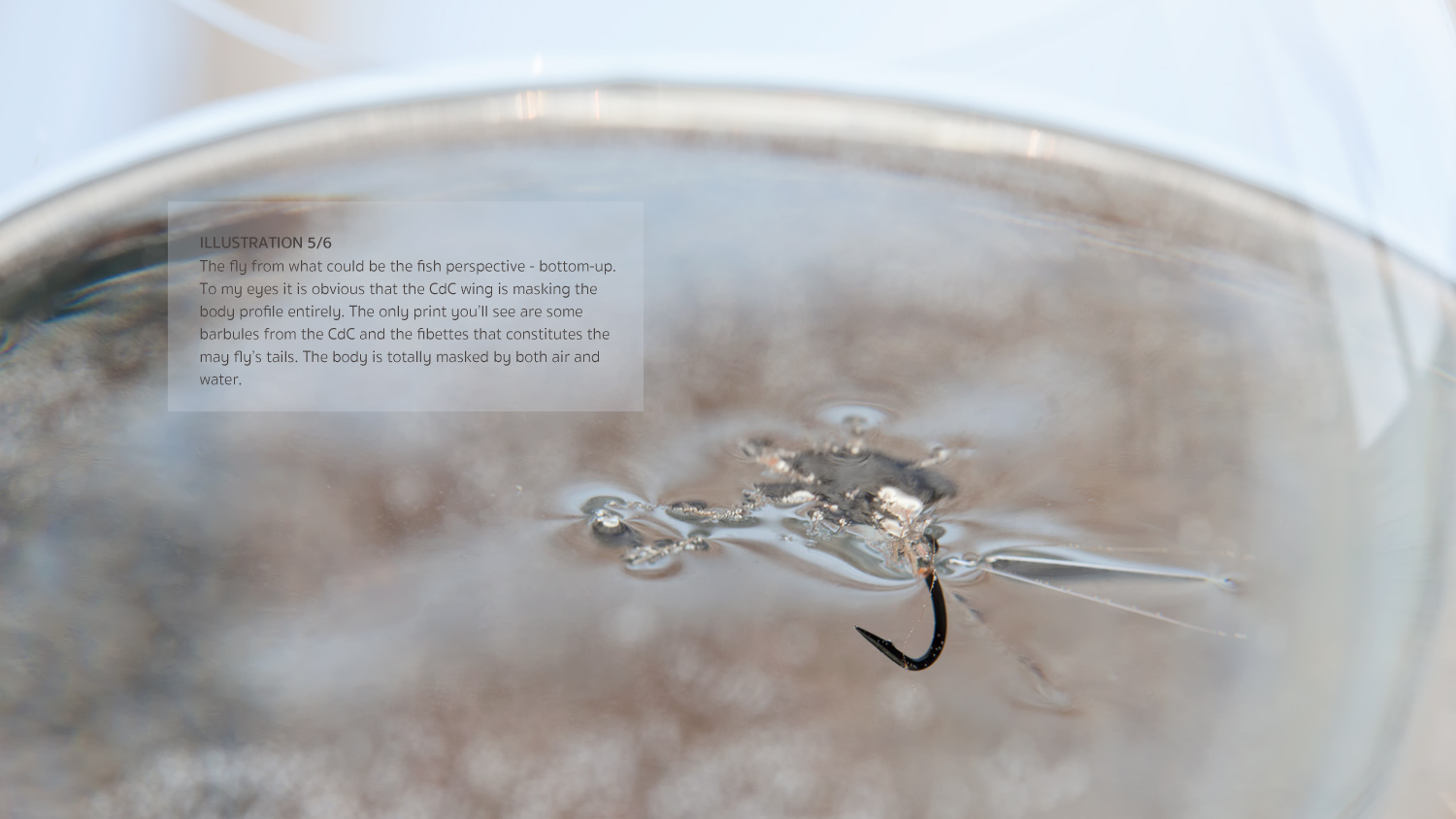 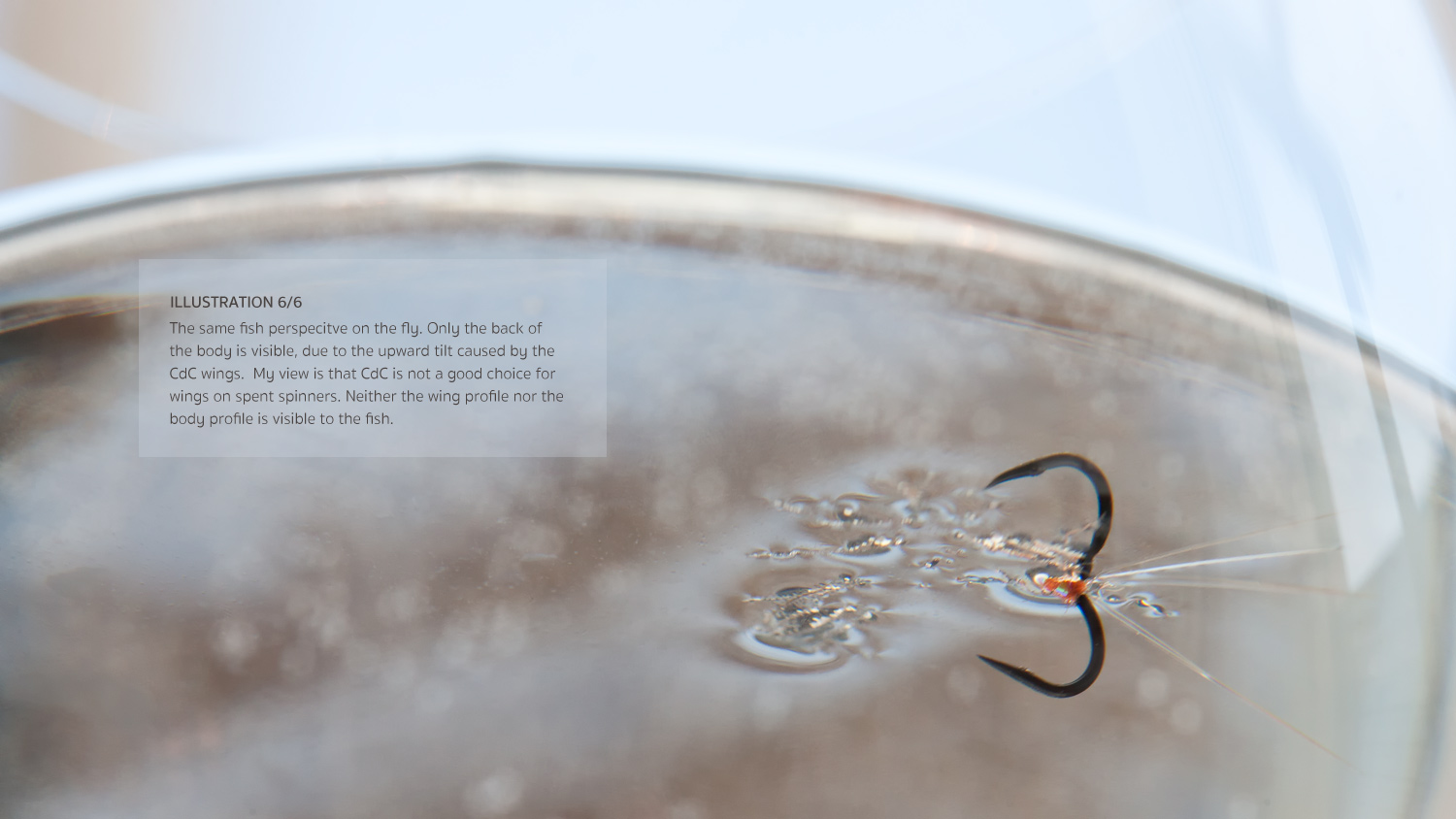 It’s impossible to fish a mayfly hatch cycle without having spinners in your fly box. Either in the form of an upright version, or the version imitating the flat and dead spent spinner.

Except for the change in the color and the full grown tails, the wings are of the primary importance when tying these bugs that are at the end of their lives. As for the dun, the wings are (together with a well presented body profile) the most important trigger for the hungry fish.

When tying spent spinners, its popular to use organza, CdC, cock hackle and even poly yarn. Each with their own advantages and issues.

I like to use tied-up hackle because of their durability, floatability and translucency. Even though it’s more cumbersome to tie, the practical advantages are many.

Therefore, I decided to perform a test in my wineglass again – to see if the tied-up hackle performs differently in the water compared to the CdC winged fly:

And yes, I know. A test in a wineglass is stupid. There is no wind, no current, no riffles and there are no fish below.The water tension is different in a wineglass. Since it’s kind of difficult to run such at test on a river or a lake, and I am testing and comparing under similar conditions, I will be able to get an indication if there are major differences between the two. And, as always, one should interpret the result with respect to the constraints of the model (which is a wine glass next to my tying bench).

A test in a wineglass, examined with a macro lens on a high-def camera (Canon EOS 1DS Mark III, and Canon EF 100 F:2,8 – Macro) will therefore give a good indication to which pattern performs best under the constraints of the test.

The result is presented in two galleries with comments – the CdC fly above, and the tied-up hackle fly below. Both flies have floated the same amount of time before shooting the pics, and both were treated with Tiemco Dry Dip Super. The CdC fly is not tied by me, but is an Umpqua standard flash spent spinner pattern (size 16). The other is tied by me, and is found here 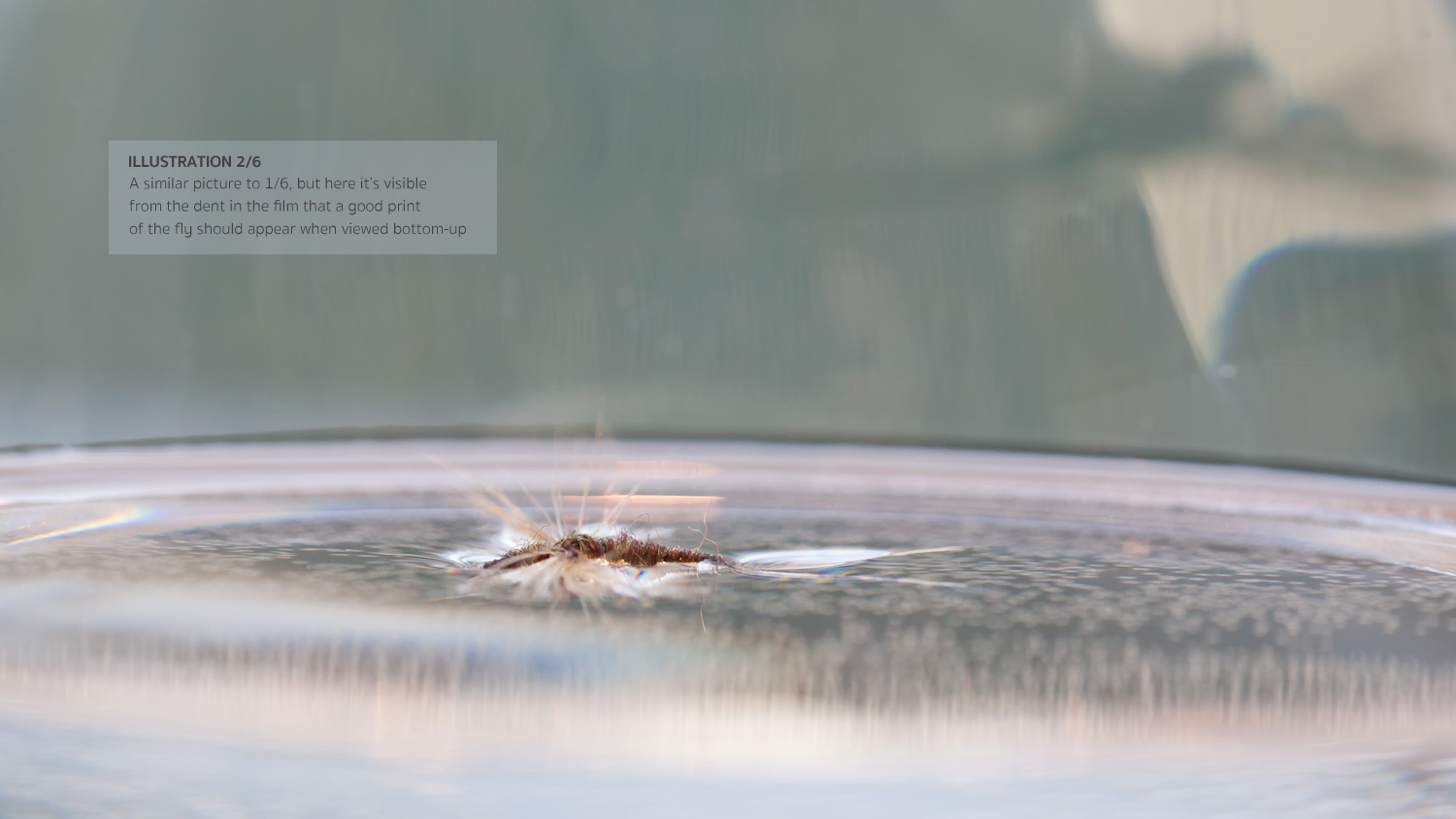 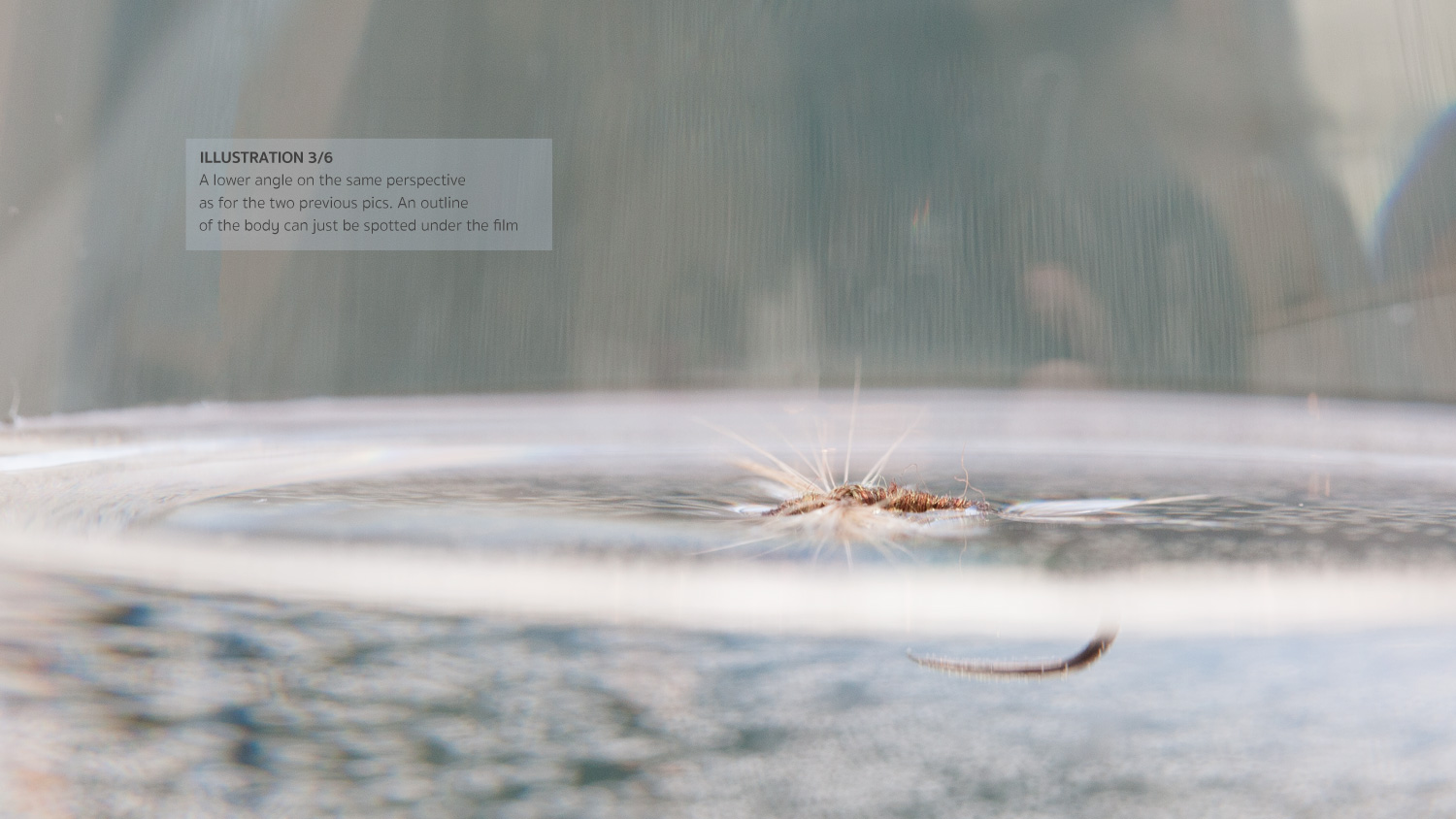 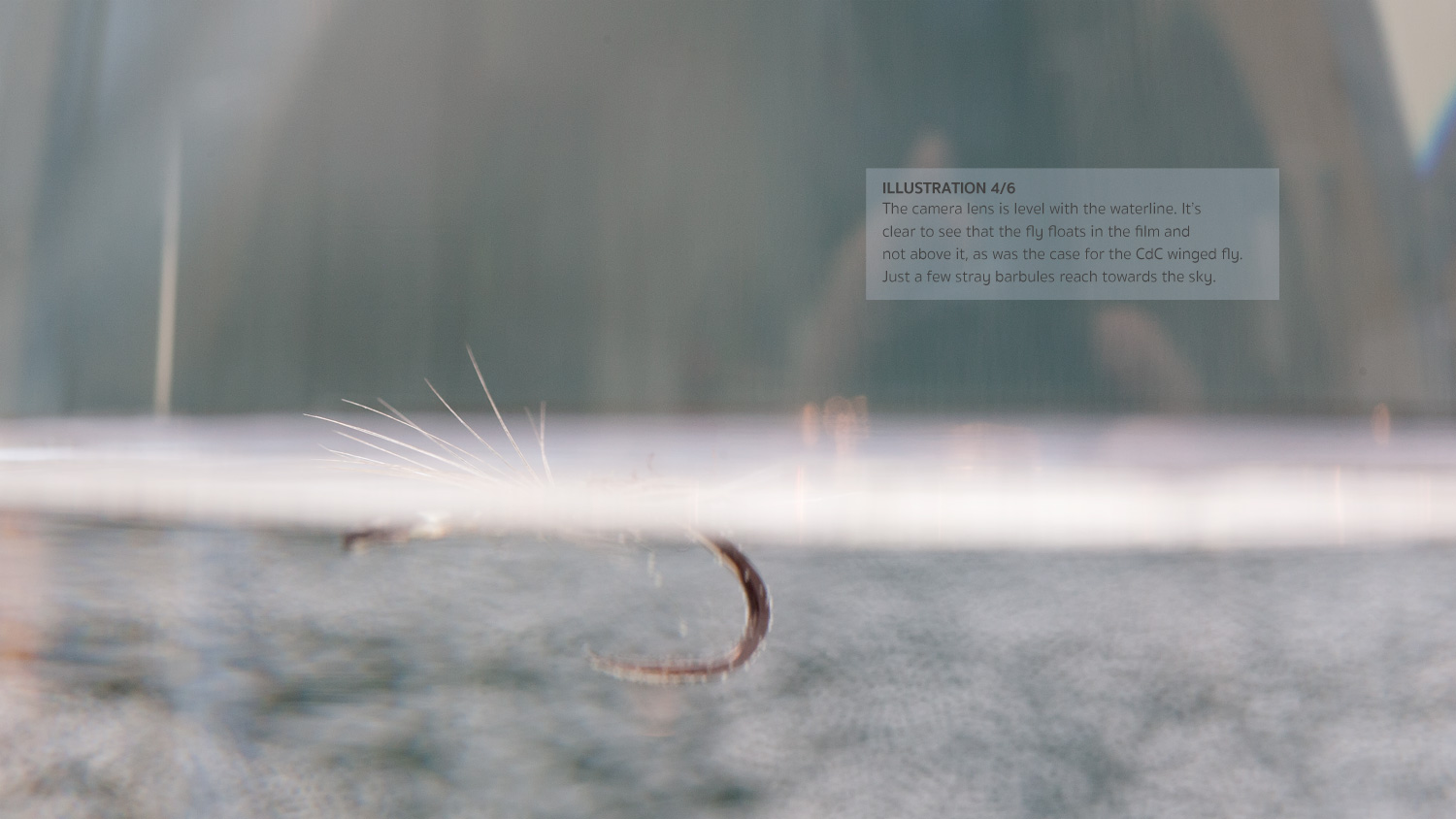 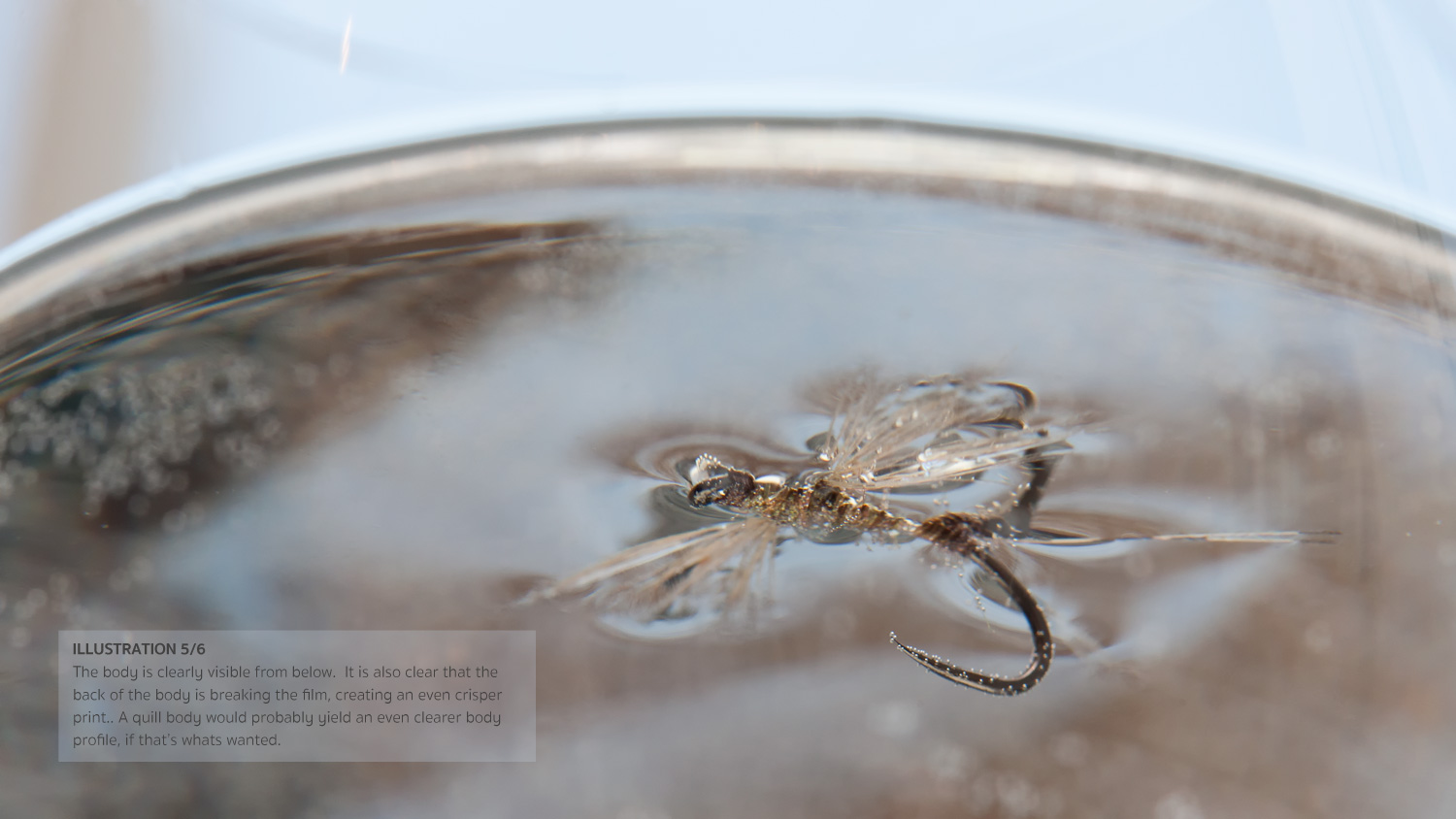 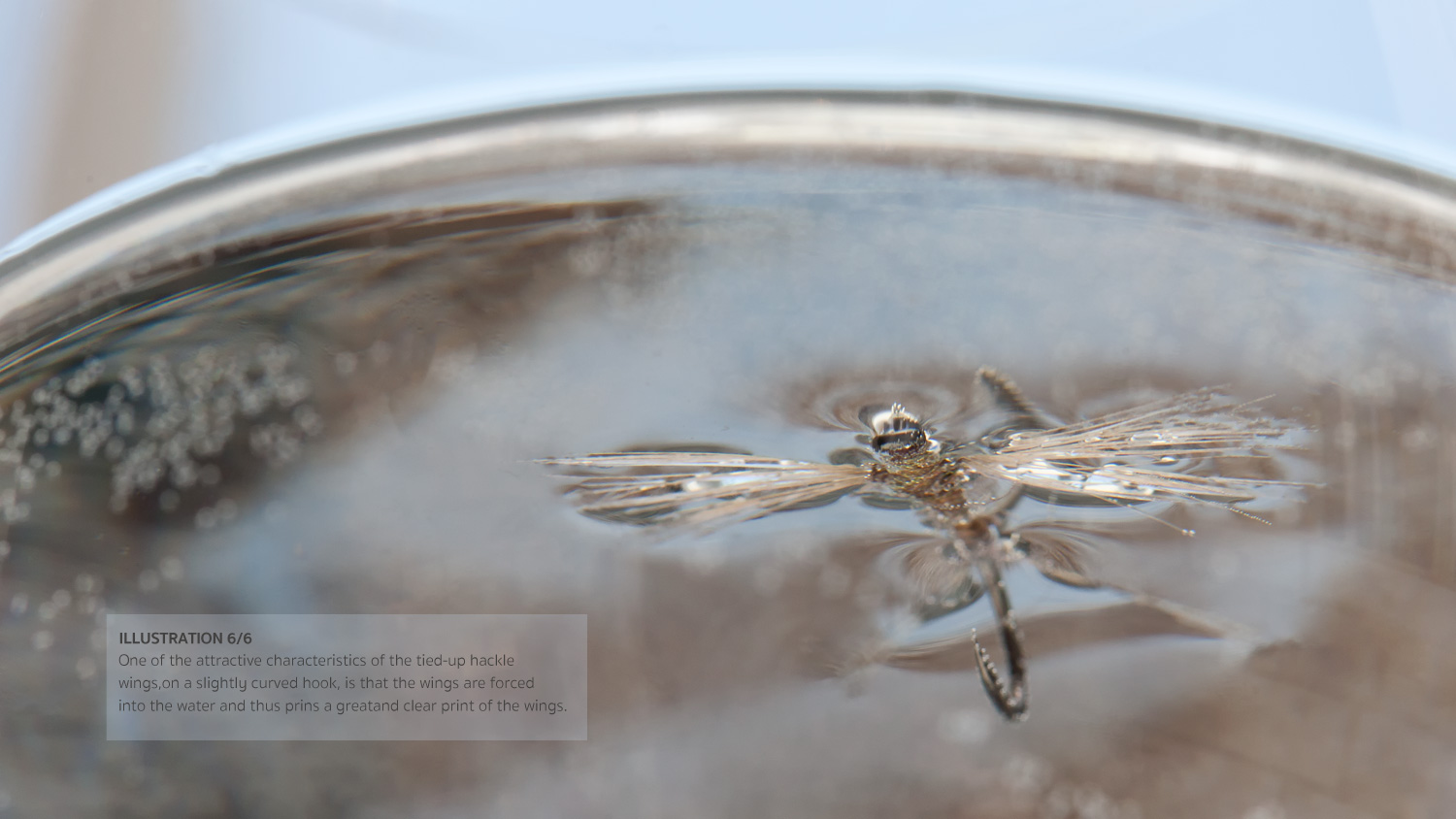 In my view the result from the wine glass is interesting

Examine the galleries to study the pictures for yourself.

Could we, or should we, draw any conclusions from these tests? Well, I never use CdC winged spinners in the first place. I never use organza based spinners, either. I do swear to using the tied-up hackled wings. But my reasons for that used to be because of the durability of the hackle wings. Both organza and CdC seem to collapse after just a few floats or takes. This is not the case for the hackled wings.

Now there might be just one other reason for choosing tied-up hackled wings, the way the body and wing is presented to the fish. The CdC wing does not seem to be a good material if you would like to have a good body and wing profile on your spent spinner.

Do you have any thoughts on winging materials for spent spinners?